SHORT VERSION:
Bianca gets a date with her crush Toby, but finds out during their date that he only accepted because he wanted to get information from her on the availability of her more attractive friends Jess and Casey, so she dissociates herself from him. In the end, she and Wesley become a couple at their school’s homecoming dance, humbling her nemesis Madison. However, before the hook-up occurs, Bianca gives Madison a speech where she acknowledges being a DUFF to someone, but informs Madison that she is a DUFF to somebody as well. However, such labels shouldn’t affect how one sees themselves, and she tells Madison that she is wasting her time labelling everyone to try to keep them down because she is missing out on a lot of great stuff around her, plus her labels are ultimately meaningless.

Bianca writes an article for her school’s newspaper on the homecoming titled “Tales of a High School DUFF”, which chronicles her experiences during the film and what being a DUFF is like, and the article becomes a hit with both students and adults alike since it resonates deeply with them. Wesley passes his science class thanks to Bianca’s tutoring and gets accepted into Ohio State University, and Bianca is accepted into Northwestern University in Illinois, so they will still be able to see each other.

LONG VERSION:
While Bianca (Mae Whitman) is hanging out with Wesley (Robbie Amell) at her “Think Rock” in the woods and comforting him over his dislike of his constantly bickering parents, Wesley – who has developed feelings for her by this point – suddenly kisses her. However, he brushes off this act as him giving her a “practice kissing session” for her upcoming date with her crush Toby (Nick Eversman). Unfortunately, neither are aware that Madison’s (Bella Thorne) toady Caitlyn (Rebecca Weil) was nearby recording the liplock over her phone. She shows it to Madison, and Madison – who is possessive of Wesley even though they aren’t currently dating – gets jealous and confronts Bianca at school. She shows her a video compilation she and Caitlyn created that displays clips Caitlyn filmed of Bianca asking random people out at the mall in preparation for asking out Toby, but it is edited to look like she was seeking sex from all of them. She then informs Bianca that she plans to get back together with Wesley, and warns her to stay away from him or else she will release the video and destroy her image.

Bianca goes on her date with Toby, and during the course of it, she finds herself thinking about Wesley repeatedly, but she tries to dismiss it. Eventually, Toby starts talking about her estranged friends Jess (Skyler Samuels) and Casey (Bianca A. Santos) at length, and Bianca soon realizes that he is “DUFFing” her; spending time with her just so he can get closer to Jess and Casey because he is attracted to them. She confronts him with this, and he doesn’t deny that he wants them, so she tells him to go screw himself and leaves in tears. She tries to call Wesley, but only gets his voicemail, and after leaving him a message telling her what Toby’s true motive was for going on the date with her and how she wishes to speak with him ASAP, she goes to her Think Rock to try to clear her head. However, she spots Wesley and Madison kissing there, and heads home feeling even worse. Later on, Wesley drops by after having gotten her message, and Bianca tells him that she saw him and Madison defiling her special place before she basically declares that she wants nothing more to do with him.

The morning of the homecoming dance, Bianca invites Jess and Casey over to her house to patch things up with them after coming to understand that they have always been genuine friends. She tells them that, deep down, she always knew they were prettier than she was, but she felt she could never talk to them about it because she thought they wouldn’t understand what it felt like to be their schlumpy friend. Casey replies that she is wrong because they all have their insecurities, and she felt like they were kind of chumps in comparison to her because she is smart, loyal, and funny, and she and Jess say that they are incomplete without her. Jess and Casey pitch an idea to forget about the dance and have a girls night out, but Bianca tells them to go to the dance and let her stay at home since she doesn’t want to see Wesley or Toby or anyone else. Her mother Dottie (Allison Janney), having eavesdropped on the conversation, then appears and objects to Bianca’s decision. She tells her daughter that she is a weirdo, but she needs to accept it and own it, and she should spend tonight worrying about how she thinks about herself instead of what others think about her for a change and go and rock the dance the way Bianca would. Feeling inspired, Bianca agrees to go, and Jess – using her fashion designing skills – assembles three dresses for the group using articles of Bianca’s clothing.

After the girls arrive at the dance, Bianca notices Wesley nearby and approaches him, and Wesley compliments her on her appearance. Bianca tells Wesley that she is taking back what she said to him, but also takes the opportunity to tell him that she is into him. He informs her that he has gotten back together with Madison, and she replies that that is fine so long as he is happy. Madison then storms up to them and tells Bianca that she is going to be releasing the video tomorrow in light of this, but Bianca tells her to go ahead and do it. After Madison says that Wesley would never leave her for a DUFF, Bianca acknowledges being somebody’s DUFF, but points out to Madison that she is a DUFF to someone as well, as is everyone else, but such a label shouldn’t affect how one sees themselves. She then criticizes Madison for labelling everyone to try to keep them down, saying that she ends up missing out on a lot of great stuff around her, like Wesley, whom she treats like he is stupid even though he isn’t, and people like him because is an amazing guy, not because he is with her. Bianca declares to Madison that she likes herself and none of this high school stuff matters to her, and she lastly tells Madison to not tear her down for not caring about her labels because, in the end, they’re meaningless.

Just then, the moment to crown the homecoming king and queen arrives, and Madison is announced as the latter. However, when Wesley is proclaimed king, he rejects both Madison and the crown, walks up to Bianca, and kisses her. They then leave the gym and go into the school newspaper’s office to do some making out, after which Bianca is hit with an idea on what to write for the article on the homecoming. Titled “Tales of a High School DUFF” and chronicling her experiences over the course of the film and what being a DUFF is like, the article becomes a hit with both the students and staff. It also goes viral, and people post thousands of comments and likes on the newspaper’s website, and kids started writing to her with their own DUFF stories, which she posted and inspired more people to submit their own stories.

Bianca narrates that Wesley – who is now her boyfriend – passed their science class thanks to her tutoring him and will be attending Ohio State University in the fall, and she got into Northwestern University in Illinois, so they will be able to visit each other. We then see her and Wesley going out on a date, and she closes out the film by stating that, in the end, it’s not about popularity or even getting the guy; it’s about understanding that, no matter what label is thrown your way, only you can define yourself. 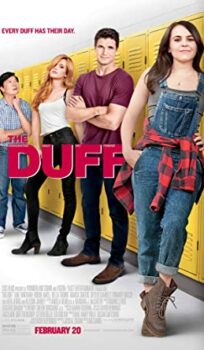