SHORT VERSION
The Germans plan to kidnap Winston Churchill. The plan fails and all of the German troops are killed. Oberst Steiner (Michael Caine) shoots Churchill to death before being killed himself, but he actually killed a body double.

LONG VERSION
In 1943, after the SS successfully rescues Mussolini from prison, Hitler orders the capture of Winston Churchill. Himmler (Donald Pleasence) orders Admiral Canaris, the head of Abwerh (German Intelligence) to conduct a feasibility study for the operation. Canaris considers the operation a joke, but since he doesn’t want to be discredited by Himmler, he orders Oberst Max Radl (Robert Duvall) to do the study. Radl learns from spies that Churchill will visit an airfield in a few weeks near the village of Studley Constable, where a German sleeper spy is located. Suddenly this joke of an operation becomes very realistic, and Radl comes up with a plan. The plan is to kidnap Churchill and bring him back to Berlin in hopes to broker a peace between the Nazis and the Allies. Upon reading the plan, Himmler secretly orders Radl to proceed with the mission without telling Canaris.

Radl procedes to recruit Liam Devlin (Donald Sutherland), a member of the IRA and hater of anything British. Devlin will be sent to Studley Constable under the guise as a game warden and meet up with Joanna Grey (Jean Marsh), the German sleeper spy, and make the necessary preparations for the German troops. Radl also recruits Oberst Kurt Steiner (Michael Caine) and his men. Steiner was court-martialed for interfering with the capture of Jews, and he and his men are in a military prison. Radl tells them his plan: capture Churchill, then meet up with a U-boat that will take all of them back to Germany. If successful, they will all be pardoned. Steiner and his men agree to the mission, and will be parachuted into Studley Constable pretending to be Polish troops on manuevers. However, they will wear their German uniforms under their Polish uniforms so that they won’t be shot as spies.

A few days later, Devlin, Steiner, and Steiner’s men are in Studley Constable and the mission is underway. The plan goes smoothly until one of the Germans attempts to rescue a girl from under a waterwheel. He is killed while saving her, but the wheel exposes the German uniform, revealing their actual identities to the onlooking villagers, and the entire village is taken hostage. One of the villagers escapes and goes to the nearby airfield and alerts a unit of US Army Rangers, led by Colonel Pitt (Larry Hagman). The Rangers attempt to take out the Germans, while Pitt’s second-in-command Captain Clark (Treat Williams) warns Churchill and his men about the plot. The attempt against the Germans fails, and Pitt is killed by Joanna Grey. She is then killed by the Rangers. Clark then leads a second attempt against the Germans, and successfully kills all of them. However, Steiner and Devlin escape and plan to get Churchill. Devlin then tells Steiner he won’t go back to Germany and goes to be with a local girl he had fallen in love with. Steiner goes to Churchill’s hiding place and shoots him to death before being killed himself by Churchill’s security. Clark arrives at the site and thinks Churchill is dead. However, it’s revealed that this Churchill is actually a body double, and the real Churchill is at the Tehran Conference. So, had the plan succeeded, the Germans would not have kidnapped the real Winston Churchill.

In the end, Radl is shot for “giving orders beyond his control to the point of treason”, which distances Himmler and Canaris from the operation. 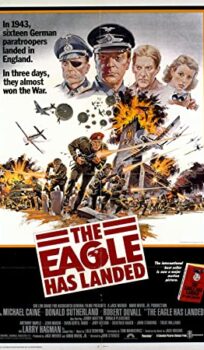