After the mountain climb begins, the audience discovers that the entire ‘sanction’ is pointless; the stolen nerve gas formula is a fake, and the US government is only making a token effort at revenge, to “make it look good.” The three Europeans all die in climbing accidents during the ascent of the Eiger, leaving Hemlock (Clint Eastwood) still uncertain about which one he was supposed to kill. At the time of their deaths, however, Hemlock has bigger problems, as he finds himself dangling at the end of a rope above a thousand-foot fall. When a rescue attempt is mounted, Hemlock sees his ‘ground man,’ Ben Bowman (George Kennedy), limping, and realizes that he is the target! Hemlock puts his trust in Bowman, and cuts his lifeline so that the rescuers can grab him. Back on the ground, Hemlock learns the whole truth, Bowman apologizes for the dark secret, and Hemlock forgives him, telling him that the government will assume that with the deaths of the climbers, the mission was accomplished. 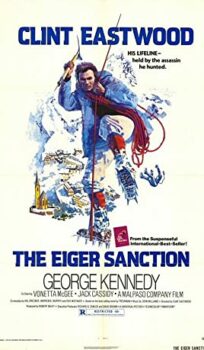