After engaging in a fight with Yzma (voiced by Eartha Kitt), which saw several comical moments including Kuzco (voiced by David Spade) changing into different animals and Yzma becoming a kitten, Kuzco gets a hold of and drinks the potion that turns him into a human again after some timely intervention on the part of Kronk (voiced by Patrick Warburton), who turned against Yzma earlier.

Now with a much more mature attitude, Kuzco apologizes to Rudy (voiced by John Fiedler) for throwing him off the balcony at the start of the film. Kuzco then notices a sulking Pacha (voiced by John Goodman) looking at the water park summer home design he intended to put in place of his village. Kuzco tells him that he wasn’t going to build the water park on his hill anymore, an act of gratitude for helping him beat Yzma and becoming human again (of course, he said it in his old obnoxious manner of speaking).

Pacha recommends he build his summer home on the hill next to his village, and it shows Kuzco took his advice, but he built a cottage like Pacha?s instead of the water park, and he enjoys a swim with Pacha and his family. The last shot shows Kronk heading up the Junior Chipmunks that he was once a part of as a kid, with Yzma, still in her kitten form, as a member. 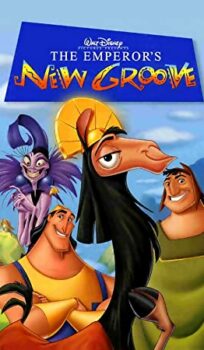