LONG SPOILER:
A long time ago, in a galaxy far, far away – The evil galaxy-ruling Empire has doubled down on its efforts to destroy the Rebel Alliance that oppose their rule after the Rebels blew up their planet-destroying weapon the Death Star in the previous film. The Rebels have been forced to hide on a barren ice planet. Former smuggler Han Solo (Harrison Ford) has grown closer to his new friends, even risking his life to save young Jedi warrior Luke Skywalker (Mark Hamill) when Luke is injured and stranded in the icy tundra. However, it’s clear that both Luke and Han have romantic feelings for Leia Organa (Carrie Fisher) – one of the leaders of the Rebels. The Empire’s second in command, a cyborg named Darth Vader (acted by David Prowse and C. Andrew Nelson, voiced by James Earl Jones), using the Dark Side of the Force (the Force is a mystical power source granting good and evil Jedi warriors alike special powers) finds the new Rebel base. The Rebels manage to hold off the Empire long enough for virtually everyone to escape. The heroes part way, with Han, Chewbacca “Chewie” (Peter Mayhew), android C-3PO (Anthony Daniels), and Leia heading to a new planet where Han has a friend who will hide them from the Empire while Luke and android R2-D2 (Kenny Baker) go in search of Yoda (voiced by Frank Oz), one of the last living good Jedi Masters (most Jedi were killed when the Empire rose to power).

Luke arrives on a swampy planet where he meets a seemingly crazy, old alien hermit. The hermit soon reveals himself to be Yoda. The Jedi master enhances Luke’s training in how to use the Force. But Yoda (as well as Luke) are also worried that Luke could be destroyed by Darth Vader… or possibly join him. Meanwhile, the other group of heroes arrives at Cloud City. The City is governed by Luke’s disreputable friend Lando Calrissian (Billy Dee Williams). On the journey, Han and Leia share a passionate kiss (though Leia still denies having feelings for Han). While staying in Cloud City, C-3PO is smashed apart by a villain lurking in the shadows (later revealed to be the Empire’s forces).

Eventually, Lando double-crosses the heroes. He reveals that they were tracked to his home by bounty hunter Boba Fett (acted by Jeremy Bulloch and Temeura Morrison), who alerted the Empire to their presence. Darth Vader agreed to let Cloud City continue to operate outside of the Empire’s rule in exchange for Lando delivering the heroes to him. Darth Vader quickly disarms and captures the heroes. He says he plans to use them as bait to lure Luke to him, where he plans to capture Luke and convince him to join the Empire and use the Dark Side of the Force. Vader had his scientist build a trap that will freeze Luke solid once he enters it. They test the freezing device on Han, and he is frozen solid but still alive. Before Han is frozen, Leia declares she loves him (and though happy she loves him, he simply responds, “I know!”). Vader gives Han’s frozen body to Boba Fett to deliver to Jabba the Hutt, an alien gangster that Han owed money to and who put a bounty on Han. Darth Vader then betrays Lando by saying that he is taking Leia prisoner (Lando had originally gotten his promise that Leia and the rest would be allowed to remain unharmed at Cloud City). Realizing the mistake he made in aligning with the Empire, Lando helps Leia and Chewie escape the Empire’s custody, and they run off to find a starship to escape im (Chewie also finds C-3PO’s parts and manages to rebuild him).

Luke senses through the Force that his friends are in danger and prepares to leave for Cloud City. Yoda unsuccessfully tries to dissuade him from leaving, saying that Darth Vader will defeat him unless Luke completes his training. As Luke and R2-D2 depart, Yoda talks to the spirit of Luke’s previous (and now deceased) Jedi Master Obi-Wan Kenobi (Alec Guinness). Obi-Wan fears Luke is their last hope to reform the Jedi and defeat the Empire, but Yoda responds that there is another (meaning someone else besides Luke has the ability to tap into the Force).

Luke arrives at Cloud City and is confronted by Darth Vader. The Dark Jedi lures Luke into the trap to freeze him, but Luke manages to escape the trap in the nick of time. Luke and Vader then fight in earnest, with Darth Vader praising Luke’s development. However, as Yoda predicted, Luke is ultimately no match for his adversary. Darth Vader disarms Luke by slicing off Luke’s hand with a light saber (a laser sword) and corners him on the edge of a platform where Luke would plummet thousands of miles to the ground. Darth Vader asks Luke to join him as his apprentice, saying that together they could overthrow the Emperor and rule the galaxy themselves. Luke refuses, angrily rebuking Vader with the fact that Vader killed Luke’s dad. Darth Vader responds that, in fact, he IS Luke’s dad. Though Luke tries to deny this fact, he can sense it is true with the Force. Rather than join (or surrender to) Darth Vader, Luke leaps off the platform. Luke uses the Force to telepathically communicate with Leia, and she manages to pilot the escape ship to catch Luke as he falls. The heroes, badly battered and missing Han, escape Cloud City.

The film ends with Luke getting a robotic hand (becoming partially a cyborg like his father, Darth Vader). They reunite with what remains of the Rebel forces and vow to rescue Han somehow. 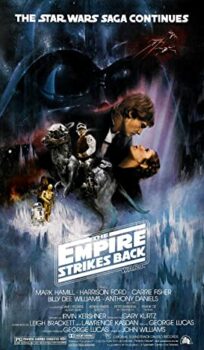