POOPER
After interviewing David Foster Wallace for five days, Rolling Stone Magazine writer David Lipsky returns home to write the article about him, but the magazine never publishes it. Years later, Lipsky writes about his time with Wallace. The book is a best seller and he goes on a book tour of his own.

LONG VERSION
Rolling Stone Magazine writer David Lipsky (Jesse Eisenberg) learns of the suicide of famous author David Foster Wallace (Jason Segel), whom he had interviewed years earlier. Lipsky goes around his home and finds several audio cassettes and a recorder and begins to play the cassettes of that interview.

Twelve years earlier, Wallace’s novel Infinite Jest is released, and it received terrific reviews. Lipsky, a struggling writer himself, is impressed by the novel and and goes to his Rolling Stone editor and asks to interview Wallace, which is allowed, even though it’s not something the music magazine normally does. Lipsky then travels to Wallace’s home in Bloomington, Illinois and meets the author at his home. He pulls out the recorder to begin the interview when Wallace makes a request. When he wants to say something he doesn’t want to include in the interview, Lipsky is to turn off the recorder. Lipsky agrees to the request, but before the interview begins, Wallace says he has to go teach his class at nearby Illinois State University, where he is a professor. Lipsky tags along, and learns from Wallace that the book tour for Infinite Jest that he is on is taking a lot of time from his teaching, which bothers him. At the class, it’s obvious that the students love Wallace. Afterwards, the duo head to a diner to eat and that’s where the interview really begins.

Wallace opens up to Lipsky on a variety of topics, from Wallace’s loneliness during the tour to his views on how pornography will desensitize an entire generation to why he wears his trademark bandana. At the end of the day, Wallace allows Lipsky to stay in his guest room instead of the local hotel. The next day, Wallace and Lipsky travel to Minneapolis for the final stop of the tour. While there, they meet with a pair of Wallace’s friends, Betsy (Mickey Sumner) and Julie (Mamie Gummer). After a reading of his novel and autograph session at a bookstore, the foursome decide to spend the day at the Mall of America. Lipsky continues the interview with Wallace, but also decides to go to Betsy to ask her about when she and David were in graduate school together. When she gives Lipsky her e-mail address, Wallace misinterprets this as flirting and tells Lipsky to stay away from her. He tries to tell him he wasn’t flirting but Wallace doesn’t believe him.

The trip back to Bloomington is tense, and eventually Wallace semi-apologizes to Lipsky, saying the end of the tour has gotten to him, and he feels like a sellout, which he hates. Back at Wallace’s home, Lipsky finally gets to the question he’s waited the right time to ask concerning his rumored heroin addiction. Wallace blows up at Lipsky, saying the only reason he is asking is to make the article about him sexier. No, he’s never taken heroin, but he does admit to an addiction of watching too much television. He also suffered from depression which led to a hospital stay, which caused the heroin rumors to start. He was depressed because he was tired of doing everything that was expected of him, and not feeling any contentment from it. That’s what led to him to write Infinite Jest. The next day, Lipsky wraps up the interview and heads home, but not before he gives Wallace a copy of his book and they agree to keep in touch. Now back at home in New York, Lipsky writes his article on Wallace, but Rolling Stone decides not to publish it.

Several years after Wallace’s death, Lipsky writes about his time with Wallace, and the resulting book, Although of Course You End Up Becoming Yourself, is a best seller. Now on a book tour of his own, Lipsky tells his audience that the tour was the best time of his life. The movie ends with him recalling Wallace once said that reading allowed people to feel less alone, and he wishes that he told him that being with him at the end of the tour made him feel less alone as well. 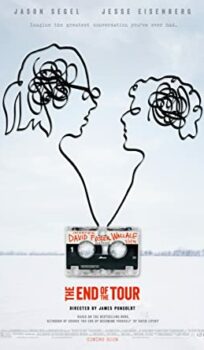