The Exorcism of Emily Rose

Father Moore (Tom Wilkinson) is put on trial for negligent homicide for his attempted exorcism of 19 year old Emily Rose (Jennifer Carpenter). He rejects a plea bargain and goes on trial so that he’ll have a chance to take the stand and tell Emily’s story, as he believes she willingly suffered so that others may know God. Erin Bruner (Laura Linney), his defense attorney, fights valiantly, but he is found guitly. However, the jury recommends a sentence of time served, so Father Moore is immediately released. It is never said for sure whether or not Emily was possessed by demons or if she was extrelemly ill, but it is strongly implied that she was in fact inhabited by demons. 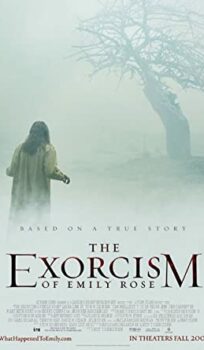