Short Version:
The Expendables storm the South American island ruled by a brutal dictator and a rouge CIA agent, killing all the bad guys, rescuing the girl, and liberating the country from the forces of evil. All of the Expendables survive, even the treacherous Gunner Jensen, who celebrates with the team after a job well done.

Long Version:
The Expendables are a mercenary team which consists of leader Barney Ross (Sylvester Stallone), Lee Christmas (Jason Statham), Ying Yang (Jet Li), Gunner Jensen (Dolph Lundren), Toll Road (Randy Couture), and Hale Caesar (Terry Crews). They are hired by Mr. Church (Bruce Willis), a CIA agent, to overthrow a brutal South American dictator and Munroe (Eric Roberts), a rogue agent backing the dictator. Ross and Christmas scout out the island, making contact with Sandra (Giselle Itie), a resistance leader who happens to be the dictator’s daughter. Ross and Christmas escape after killing 41 soldiers, but Sandra is imprisoned and tortured for helping the mercenaries. Though the team agrees to call the mission off, Ross has an attack of conscience when thinking of Sandra, and decides to head back to the island. Meanwhile, Jensen has turned traitor and is working for the enemy, and after an intense chase, he is shot by Ross. Jensen gives Ross the truth before presumably expiring.

The team returns to the island, where they wind up in a massive firefight with the dictator’s army. The dictator is murdered by Munroe, who attempts to escape the island with Sandra as a hostage. The Expendables manage to destroy the army, kill Munroe, and rescue Sandra, all without losing a single man. Ross gives his share of the job to Sandra to help rebuild the island. The team returns home to celebrate, where they are joined by a forgiven Jensen, who actually survived Ross’ gunshot wound. The team parties joyously as the film ends. 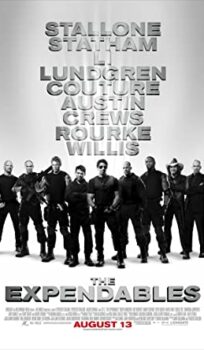