In the early 1960’s, Tammy Faye LaValley (Jessica Chastain) and Jim Bakker (Andrew Garfield) are students at North Central Bible College in Minnesota, where they fall in love and get married. They drop out of school and become traveling preachers, much to the displeasure of her mother Rachel (Cherry Jones). In their sermons, Tammy Faye sings and uses puppets to get the attention of children while Jim preaches to the adults. Their preaching style soon gets the attention of evangelist Pat Robertson, who invites them to come on to his television network CBN and soon they have their own show, Jim and Tammy. Jim later becomes the first host of CBN’s flagship program The 700 Club, and Tammy Faye gives birth to their daughter Tammy Sue.

While working at CBN, the Bakkers meet Reverend Jerry Falwell (Vincent D’Onofrio), and they soon develop a friendship. Following a conversation with Falwell about the politicization of faith that is taking over Christianity, Tammy Faye encourages Jim to leave CBN and start his own television network, where they can control their own programming. Soon thereafter, they quit CBN and start the PTL Satellite Network, and they star in their flagship program The PTL Club. As the years go by, the program becomes increasingly popular, and the Bakkers, who preach that God doesn’t want you to be poor, become rich through viewer donations. They even invite Rachel and her husband Fred to move in with them, but after accepting the offer, Rachel becomes suspicious of how the Bakkers are getting and using the money that comes into the ministry. Meanwhile, Tammy Faye, who sings on the program, is now recording albums.

As the media begin telling of PTL’s handling of their finances, Tammy Faye is pregnant again. She is also having an affair with her record producer Gary Paxton. On the day that Tammy Faye gives birth to their son Jay, Jim learns of the affair and fires Gary. Sad after losing her only friend, Tammy Faye begins to abuse drugs and increase the amount of makeup that she wears. This later increases due to Jim’s never-ending quest of expanding the ministry, which will now include a water park, his constant denial of allegations of homosexual affairs (which date back to their college days), and Reverend Falwell’s increasing political oversight of the ministry. While all this is happening, AIDS is becoming an epidemic in the US. Reverend Falwell, who wants nothing to do with homosexuals, calls it “gay cancer”. In response, Tammy Faye, behind Jim’s back, invites a homosexual pastor onto the program, and together they say that just because you’re gay doesn’t mean that God doesn’t love you. Falwell is angry that Tammy Faye would say that on a Christian TV network, and Jim is angry that he wasn’t told that she booked this guest.

Tammy Faye’s drug use finally catches up to her when she appears on their show high, and she is immediately sent to the Betty Ford Clinic. After she returns home, she and Jim have a conversation about their marriage and the ministry. It’s here that Jim admits to having an affair of his own as revenge for her affair with Gary. However, he gave PTL funds to the woman as hush money, but she went public anyway. As a result of this allegation, the media begin a feeding frenzy against the Bakkers and PTL. Jim asks Falwell to temporarily take over the program until this blows over. He agrees, but he says that it would be best for them to separate from the ministry for now. However, instead of protecting the Bakkers, Falwell throws them under the bus by revealing their salaries and the homosexual allegations against Jim. He orders all of the Bakkers’ possessions be sold to cover their massive debt, and even throws Rachel and Fred out of their home, because it was built with PTL funds. Jim is indicted and later imprisoned for fraud, but he protected Tammy Faye by saying she had nothing to do with the finances.

It’s now 1994, and Tammy Faye’s reputation is in tatters. Secular media still view her as a punchline, and the Christian media want nothing to do with her. She and Jim are now divorced, Rachel has died, and she is unable to find any ministry work. One day, she gets an invitation to appear in concert at Oral Roberts University. She plans on turning it down, thinking they’ll just laugh at her, but after visiting Jim in prison, he convinces her to accept and get back to performing and preaching the gospel. At the concert, Tammy Faye preaches for a few minutes then begins singing The Battle Hymn of the Republic. Even though she’s the only one on stage, she invisions herself performing with a large gospel choir. The movie ends with title cards saying that Reverend Falwell couldn’t save PTL and it went bankrupt. Jim is now out of prison and has restarted PTL with his new wife Lori. Tammy Faye continued to support LGBTQ+ communities following her interview with the gay pastor until her death in 2007. 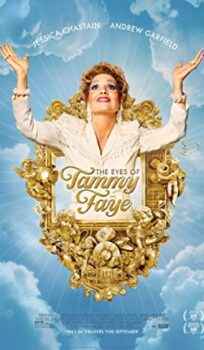