Pooper:
Sammy Fabelman weathers his parents’ divorce and, with the encouragement of his father, leaves college to embark on a career in film.

Long Ending:
Sammy Fabelman (younger – Mateo Zoryan, older – Gabriel LaBelle) is taken to the movies for the first time by his parents – analytical computer engineer Burt (Paul Dano) and emotional musician Mitzi (Michelle Williams). The young boy is blown away by the film (The Greatest Show on Earth), particularly a scene involving a major train crash. He convinces his parents to buy him both a toy train set and a video camera for Chanukkah and steadfastly crashes his train and edits it together into a movie. Sammy’s passion for filmmaking only grows as he continues making short films featuring his sisters Natalie (younger – Alina Brace, older – Keeley Karsten) and Reggie (younger – Birdie Borria, older – Julia Butters). The family grows, welcoming a fourth child in Lisa (Sophia Kopera). Burt takes a new, higher-paying job in Arizona. They move along with their best family friend, another computer scientist they affectionately call Uncle Bennie (Seth Rogen).

Life is good in Arizona. Sammy makes a bunch of friends in his local Boy Scout troop, and they star in his movies. His artistry continues to grow as his films get more complex – he incorporates special effects and learns how to get actors to emote. Mitzi also plays a few gigs (including on TV), and they all have fun living out West – enjoying camping and the nice weather. Burt gets a job offer in California but will only go if Mitzi approves. As she’s particularly happy (and because the new employer won’t hire Bennie), she declines. Sammy is upset about his great uncle (cameo by Judd Hirsch), who led a life in show business visits. In a private conversation, the great-uncle says that Sammy has moviemaking in his blood and will someday abandon his family to pursue his dreams…. just like he did. Sammy is shaken by this prediction.

Mitzi’s mom dies, and she sinks into depression. Burt asks Sammy to cut old family film footage into a movie to cheer her up. While reviewing the old footage, Sammy realizes that he’s inadvertently captured many moments where Mitzi and Bennie are seen flirting and touching each other in the background of the shots. Sammy deduces that they’re having an affair and becomes hostile to his mother. She eventually slaps him due to his disrespect, and he shows her the footage capturing her and Bennie. Despondent she’s been caught, Mitzi agrees to the move to California, and Sammy decides to keep her secret. However, he also decides to abandon moviemaking. Before the Fabelmans leave, Bennie gifts Sammy an expensive movie camera and tricks him into accepting it.

Although the Fabelmans are much wealthier, their relationships deteriorate. The Fabelman kids experience intense anti-Semitism and bullying from their new classmates, and Mitzi sinks further into a deep depression. She refuses to play the piano and buys a pet monkey named Bennie. It becomes apparent to the whole family, including Burt, that Mitzi simply can’t live without Bennie. The parents eventually decide to divorce, with Mitzi moving back to Arizona. Meanwhile, Sammy is coaxed by his new girlfriend to record their high school class’ Senior Day. The movie he makes is a big hit – even winning the begrudging respect of some of his bullies. His love of filmmaking is rekindled. Sammy and Mitzi genuinely patch up their relationship just before she leaves.

A year later, Sammy is living with his father and begrudgingly commuting to college. He writes letters every day to TV and film producers asking for a job. College makes Sammy miserable, and Burt eventually encourages Sammy to chase his dreams (even noting that despite the pain he still feels from the divorce, he wouldn’t give up his time married to Mitzi). With his dad’s blessing, Sammy meets with a TV producer who may offer him an internship. The producer introduces Sammy to legendary director John Ford (cameo by David Lynch), who works across the hallway and inspired many of Sammy’s own works. The director gives one quick lesson to Sammy about infusing art into his filming before the notoriously cantankerous man kicks him out of his office. Encouraged by the meeting and free to pursue his dreams, Sammy happily walks through a movie lot toward his future. 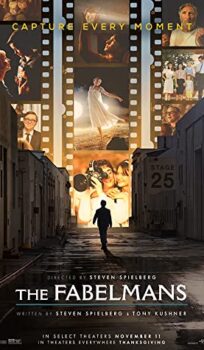