Two different stories take place over the film: the real-life interactions between two patients at a hospital and the fairy story the young man tells the little girl. The two stories intertwine as events at the hospital effect the fairy tale and vice versa:

Crippled after a suicidal stunt for a film, Roy (Lee Pace) trades pieces of the fairy tale in return for Alexandria’s theft of morphine so that he can overdose. He eventually does, falling asleep as he tells her the next chapter of the story. However, it turns out the morphine she stole was nothing but sugar pills the doctor were giving a hypochondriac patient. The next time she tries to get him his pills, she falls and is seriously
injured.

A distraught Roy continues the story, killing off the characters one-by-one. The Indian, Luigi, Charles Darwin, the Monkey, and Otta Benga all die attempting to kill Governor Odious. Roy’s character, the masked bandit, is about to die as well but a distraught Alexandria convinces Roy to let him live. The bandit survives, rejects Evelyn’s flightly attentions, and sets off with his “daughter” Alexandria.

In real life we hear that Roy learned to walk again and Alexandria returned to working in the orange groves. She would always look for him in the movies, knowing he was the one doing all the stunts. 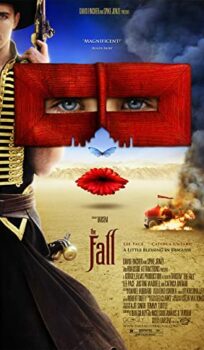