After Jack’s (Nicholas Cage’s) “glimpse” into what his life would have been like with Kate (Téa Leoni) ends, he tracks the “real” Kate down. She’s never married either, but she has received a big promotion, and is about to get on an airplane to Paris. He blows off the biggest deal of his career and convinces her to have coffee with him by describing what their marriage might have been like. The movie closes without a real resolution, but the viewer is probably supposed to infer that they get together. 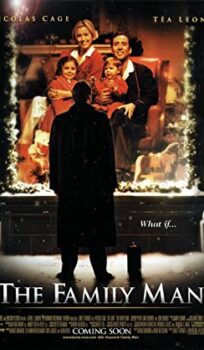