Short Spoiler:
Alec and Nora eat bacon cheeseburgers. Then they get abducted by a cannibalistic cult on a farm that treats humans like livestock. Then they die.

Long Spoiler:
Alec and Nora (Alec Gaylord and Nora Yessayan) are travelling through the countryside. Along the way, they stop at a diner and eat bacon cheeseburgers without giving it a second’s thought of what the cow and pig went through. Later, they get tired and a gas station owner suggests they stop at a campground up the road since there are no hotels or B&Bs around. The campground owner tries to make small talk about life on the campground and running the facility before Nora rudely interrupts him and says they are really tired and wish to get to sleep. They are apparently so tired they don’t notice the bloodstains on some of beds or the flies buzzing around. They go to sleep and then the horror begins.

They wake up in cages on a farm run by cult members who wear animal masks. Nora is taken to a room where they artificially inseminate her. Then they move her to a barn with other women who are being milked. Also one woman is holding a baby. A cult member comes over and pulls the baby from her and weighs the baby and then kills it and puts it in a bag that presumably has other babies in it. Meanwhile, Alec is placed in a barn with other men. A cult member walks around with a sledgehammer and whacks the men one by one and eventually whacks Alec. Then they are stripped naked and put in a wagon and wheeled away.

At this point, we see that the leader of the cult is the campground owner and his right hand man is the gas station attendant. They are talking about killing the people and making meat out of them. They apparently sell it to someone who pays top dollar.

Finally in the last 15 minutes of the movie, Alec shows up at Nora’s barn. Nobody ever bothers to explain how he went from whacked with a sledgehammer and placed naked in a wagon to fully clothed and able to get away from the cult members or how he magically could locate Nora in this massive farm. Anyway, they decide to escape. Unfortunately, the cult members see them fleeing and give chase. Then Alec suddenly drops dead presumably from his sledgehammer injury. Nora continues to flee and finds a male prisoner who tells her that the cult uses a bus to transport their members and maybe she can use this to get away. She grabs another woman that she was talking to earlier and they get on the bus and start it up. They begin to breathe a sigh of relief and then turn around to see the bus filled with waiting cult members and Nora gives a look of despair.

Then the movie segues to a shot of cult members standing at a dinner table. As the camera slowly zooms out, you see Nora and the other woman have been roasted and placed on silver plates with apples in their mouths. This would be infinitely more shocking if the DVD case didn’t spoil this scene. 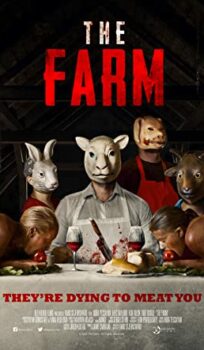