Bull McCabe (Richard Harris) attempts to scare off the American buyer (who intends to pour concrete over the field that McCabe’s family has rented for generations and turned into a beautiful pasture), but inadvertently kills him.

McCabe buys the field the next day, but the Tinkers, who blame McCabe for the death of one of their donkeys (that was actually killed by McCabe’s son Tadgh), find out about the murder and tell the priest and the widow who owns the field. They find the body of the American and promise to make McCabe pay (though it’s far from certain that they can convict him in a court of law).

McCabe’s son decides to leave with a Tinker’s daughter but on his way out of the county learns that McCabe, driven mad by the loss of his 1st son 18 years ago, by Tadgh departure, and by letting his mother, years and years ago, die without final rites so that he could protect the field, is driving all his cattle towards the cliffs. Tadgh tries to stop him but is stampeded off the cliff with the cattle.

The film ends with McCabe wading into the surf, trying to beat it back away from his son. 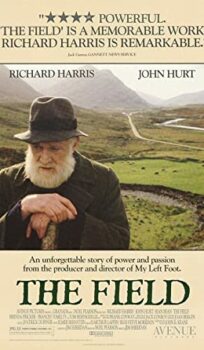