Nayland Smith and his fellow agents follow Fu Manchu and his henchmen (and Constable Alice Rage, who fell for Fu and switched sides) to the villain’s hideout once Fu believes he has the King George V diamond that can complete his Elixir Vitae. Nayland has had the real one all along and intends to use it as a bargaining chip, but the good guys are so outnumbered on Fu’s turf that he has no choice but to give up the gem.

Fu takes the elixir and is de-aged into his villainous prime. He then has a private chat with Nayland revealing that he made two doses of the elixir because he doesn’t want to take over the world without his greatest opponent trying to stop him. He gives the remaining dose to Nayland to take later, but warns that shortly, all the good guys will be “wiped out!”

As it turns out, it’s because Fu has invented (in the 1930s!) rock-and-roll, and as the crowd gets into the swing of things, Nayland realizes Fu really has won this time… 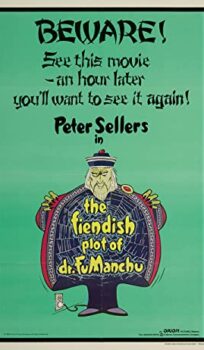