Submitted by Evil Ed, and Evan B

POOPER:
After dissolving Stathis Borans’ (John Getz’s) right foot and right hand with fly vomit composed of formic acid, and trying to combine himself with his pregnant lover Veronica (Geena Davis), the mutating Dr. Seth Brundle (Jeff Goldblum) is inadvertently fused with metallic components of his teleportation device. Veronica blows the suffering Brundlefly’s head to bits with a shotgun.

LONGER VERSION:
Veronica Quaife (Geena Davis) is a reporter for Particle magazine. She meets enigmatic scientist Seth Brundle (Jeff Goldblum) at a science convention and he convinces her to accompany him back to his apartment to show her his secret experiments. He demonstrates that he has built a teleporter capable of transporting inorganic matter from one pod to another. It accomplishes the task by disintegrating the object in the first pod and rebuilding it in the second pod. Eventually, Seth convinces Veronica to write a book chronicling his experiments as he attempts to successfully transport organic matter. Veronica’s ex-boyfriend and Particle magazine editor Stathis Borans (John Getz) is opposed to her endeavor.

Veronica and Seth eventually fall in love as she observes his exploits. Every time Seth teleports organic matter (he uses baboons to test out the teleporter), the animal is reincorporated as a deformed mass of blood and guts. An offhand comment by Veronica helps Seth solve the problem and they successfully teleport a baboon from one pod to another. The pair decide to celebrate by going on a vacation, but Veronica first visits Stathis to stop him from publishing an article on Seth’s work (Stathis pieced together what Seth was up to from stalking Veronica and investigating Seth’s background). Seth gets drunk while Veronica is gone and convinces himself that she is still in love with Stathis. In a drunken, self-pitying stupor, Seth teleports himself. Unknown to poor Seth, a fly had also flown into the pod when Seth was teleported.

Seth begins undergoing Spider-Man-esque changes. He develops incredible physical strength and stamina (which he uses primarily for marathon love-making sessions with Veronica). He also experiences an insatiable appetite for sugar. Seth assumes that the changes are due to the teleportation having a purifying effect on him and demands Veronica teleport herself. As Seth’s behavior grows more erratic, the two break up.

Seth’s body begins deteriorating, with his nails, teeth, and ears falling off. He also is no longer able to eat solid food (instead spewing acidic vomit that dissolves food that he can then lap up). He eventually has his computer reenact the teleportation process and realizes that a fly was inside the teleporter. Seth asks the computer what happened to the fly, and the computer responds that Seth and the fly’s DNA were fused together when the teleporter rebuilt Seth on a molecular level. Seth guesses that the only way to cure himself is to teleport with another human (thus fusing their human genetics to his hybrid genetics). Meanwhile, Veronica discovers that she is pregnant with Seth’s child. She visits Seth to tell him the news, but realizes that he is almost completely a monster. Seth then follows Veronica to an abortion clinic and abducts her.

Stathis (who took Veronica to the abortion clinic) breaks into Seth’s home. He tries to shoot Seth but is overpowered. Seth then uses his acidic vomit to melt Stathis’ hand and foot. Veronica stops Seth from melting Stathis’ head. Seth demands that Veronica teleport with him so that he, Veronica, and the baby can all be fused together into one happy family. She resists and, during the struggle, Seth fully turns into a fly-like creature (called Brundle-Fly).

The creature throws Veronica into a pod and enters another as the computer counts down to teleportation. Stathis regains consciousness and manages to shoot the wires connecting the computer to Veronica’s pod. Brundle-Fly sees this and damages his own pod trying to break out. But the teleportation occurs before he can escape and both he and debris from his pod are teleported and fused together. An even more disgusting fly-creature emerges, with parts of the mechanical pod fused to its body. The Brundle-fly crawls to Veronica and makes it clear he wants to be put out of his misery. Veronica shoots its head off and collapses to the floor in tears. 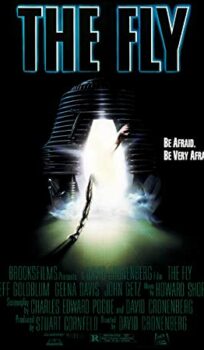