Morgan (Marjoe Gortner) blows up a dam keeping the ocean out, and the massive amounts of seawater flood the area and drown all of the giant rats. Morgan, Lorna (Pamela Franklin), Thomas (Tom Stovall), Rita (Belinda Balaski), and the latter two’s newborn son are the only survivors.

However, two bottles with remnants of the “food of the gods” later manage to wash downstream towards where some cattle are. The bottles break open, and the “food” contaminates the water, which the cattle drink. They are later milked, and the movie closes with a bunch of schoolchildren drinking the tainted milk….. 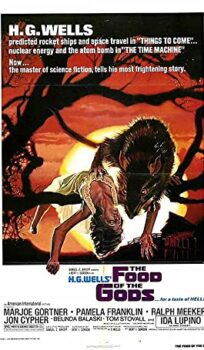