The New Founding Fathers of America return to power and reinstate the Purge. Even after the night of the Purge passes, a white supremacist group called the Ever After Purgers plan to carry on the event to kill off immigrants. At the center of it is Adela and Juan, a Mexican couple, and the Tuckers – Dylan, Cassie, Harper – whom the couple works with. When Mexico and Canada announce that they are opening their borders to Americans escaping the violence, the group heads to Mexico.

Dylan’s father Caleb is killed by their ranch hand Kirk as payback against the rich. Juan and his buddy TT kill Kirk and his goons before taking the group away. TT is killed when they run into Ever After Purgers, led by Elijah Hardin and his wife. Juan kills the wife before they escape. When the violence becomes too much for the military to control, the borders are closed immediately, but Adela and Juan remember to follow paintings of roses to a sanctuary. This leads the group into Mexico, but the Ever After Purgers follow them and engage in a bloody showdown, with Elijah and his follows all killed. The rest of the heroes are safe.

The Purge is set to continue as the country falls apart, but Americans are rising up to fight back against the Purgers. 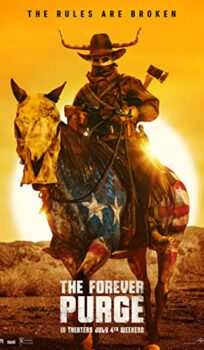