Ray Kroc (Michael Keaton), a struggling blender salesman, takes an order from Dick and Mac McDonald (Nick Offerman and John Carroll Lynch), who run a McDonalds hamburger restaurant in San Bernardino, California. Impressed by the restaurant’s speed and success, Ray convinces them to franchise the restaurant. The brothers agree, on the condition that any and all changes to the infrastructure be approved by them.

The franchisees become more and more successful, but the McDonald brothers keep vetoing Ray’s suggested changes, including using artificial milkshakes to save money. Ray also discovers that he is losing money because of his minor shares in the franchise.

Ray is approached by Harry Sonneborn (BJ Novak), a real estate mogul who convinces him to buy the land surrounding the McDonalds restaurants to earn enough money to buy out the brothers’ shares in the company. When the brothers find out they’re being cut out, Mac faints and is checked into the hospital.

Ray visits them in the hospital and gives them a blank check with the McDonalds logo on it. The brothers eventually agree to a 2.7 million dollar settlement, which Ray agrees to, shaking hands to seal the deal.

As a consequence, the brothers’ original McDonalds restaurant can no longer be called McDonalds. They rebrand, but the restaurant is shut down when a McDonalds franchise opens across the street.

Ultimately, the brothers never receive their settlement because they were unable to prove their handshake deal. The money would’ve amounted to 100 million dollars a year by today’s inflation.

Ray Kroc died in 1984 and his second wife donated a substantial portion of their fortune to charity. Sonneborn became the first CEO of McDonalds, but resigned in the 60s due to a disagreement with Ray. Today, McDonalds feeds 1% of the world’s population every day. 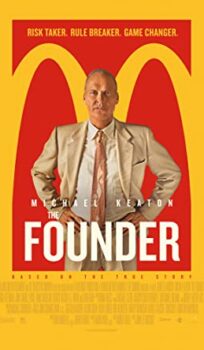