SHORT VERSION:
Tod and Copper help the Singing Strays get the attention of Mr. Bickerstaff, the talent scout for the Grand Ole Opry, and after hearing them sing, he signs them on to perform there. Cash and Dixie also mutually confess the romantic feelings they have long held for each other. Copper decides to leave the group and stay with Tod, preferring to spend his time with him. The movie ends with Tod, Copper, and their respective owners Tweed and Slade listening to the Singing Strays perform at the Opry over the radio.

LONG VERSION:
Copper gets increasingly swept up in performing with the Singing Strays to the point where he begins to neglect Tod, and Tod subsequently gets upset about it. Dixie – whom Cash kicked out of the group earlier on because of her argumentative nature and diva attitude – takes notice of Tod’s downheartedness and has a chat with him, and while bonding over feeling cast out by their respective comrades, Tod mentions that he lied to the band about Copper being a stray. Sensing an opportunity to get Copper booted out of the group so she can get back in, Dixie asks Tod if he would like to get his best friend back, and when he asks how that can be done, she tells him that she has a plan. Meanwhile, Copper hangs around Cash as he reminisces about when he first met Dixie, and it is implied that he has long held romantic feelings for her despite their disagreements.

The next morning, Tod and Dixie go to Slade’s farm, intending to have Slade and Chief follow them back to the fairground and to Copper so Slade will see him and take him back home. Tod wakes Chief and gets him to chase after him, and the noise causes Slade to emerge from his house. While trying to hastily put on his pants, he trips and falls on the steps, causing him to shoot off a round from his shotgun and get Tweed’s attention, and Tweed then sees Chief pursuing Tod through her yard. Tod leads Chief all the way to the fair with Slade and Tweed following right behind them in their cars and Dixie hitching a ride with Slade, and when they get on the fairgrounds, they inadvertently trigger a series of events that results in utter mayhem being wreaked all across the fair, the biggest incident being the Ferris wheel becoming a runaway ride and Dixie getting caught in one of the passenger cars as it rolls.

Tod reaches the barn where the talent show is being held, as does Chief, Slade, and Tweed, just as the Singing Strays are about to perform. Amos calls Copper’s name and yells that he is his dog, enlightening the Strays to the fact that Copper is a pet. Just then, the Ferris wheel comes crashing into the barn and comes to a stop with Dixie meeting nose-to-nose with Cash, and the audience members all run for the hills. When Cash spots Mr. Bickerstaff – the talent scout for the Grand Ole Opry whom he was hoping that he and the band would impress – leaving the fair in tears after having been subjected to one too many painful situations there, including this disaster, Cash tells Copper that he is fired. However, the other Singing Strays then ditch Cash, having gotten tired of him letting his yearnings for fame suck all the fun out of being in the group as well as for having lashed out at Copper. Cash then shuns Dixie, blaming her for costing the Strays a shot at the big time with the destruction that has taken place. Tod then tries to apologize to Copper, but he blames Tod for ruining everything before heading home with Slade, and Tweed takes Tod back to her car. While driving home, Tweed’s car and Bickerstaff’s car nearly strike each other on the road, and when Bickerstaff puts the brakes on, his hat flies off and lands on Tod.

The next day, Dixie pays Copper a visit and lets him know that blowing his cover was her idea, not Tod’s. She says that she lost sight of what was truly important and is now sorry for what she did to him, and she also adds that all Tod wanted was for Copper to be his friend again. She then walks off, and later, Copper goes to visit Tod, where they repair their friendship. Tod then decides to help Copper and the Singing Strays get their audition with Bickerstaff, so he gives the man’s hat to Copper and tells him that he can use the scent on it to track him down, and while he does that, he will go and get the Singing Strays.

Tod runs to the fair and finds Cash and tells him that Dixie is in trouble, which grabs the attention of the rest of the band, and he gets them all to follow him. Copper finds Bickerstaff at a local diner, and he howls, which Tod and the Singing Strays hear just after they have reached a fork in the road. After Tod points out that the howl is coming from somewhere down the left road, the band goes down it to locate the source while Tod heads down the other road to get Dixie and tell her that Cash is the one in trouble, and he brings her to the band just as they reach Copper. When Cash questions Tod and Copper on why they brought the entire band together, Copper simply replies that this is the way it ought to be. They then get the Strays to start singing, and the group goes on top of Bickerstaff’s car and continues to sing while Tod and Copper ensure that Bickerstaff hears them, and Copper joins the other dogs in their song. When they finish, an ecstatic Bickerstaff says that he has finally found his act for the Grand Ole Opry.

As the Singing Strays’ driver Lyle pulls up in their bus, Bickerstaff goes up to him to have a chat with him, and Cash and Dixie finally confess their feelings for one another. Tod walks away during this, believing that Copper will be joining the Strays permanently now, but Copper catches up to him and says that he is going to stay here and have fun with him. We next see the Singing Strays performing at the Grand Ole Opry, which Tod and Copper hear over the radio, along with Tweed and Slade. 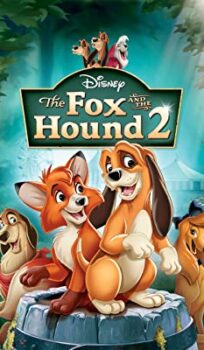