When Tod is secretly visiting Copper at night after the latter’s return home from a long hunting trip, Chief spots Tod and barks to alert Slade. Slade and the dogs chase Tod into the woods, and Copper catches up with him first, but decides to divert his master away from him so he can escape. However, Tod soon runs into Chief, who chases him down some train tracks just as a train is coming their way. Tod avoids the train, but Chief gets hit and suffers a broken leg. Copper sees this and swears vengeance on Tod.

Later, after Slade angrily tells Tweed that he intends to kill Tod for hurting Chief, Tweed realizes that Tod is no longer safe with her, so she leaves him at a game preserve so Slade can’t kill him. Slade figures out where Tod went, but he is undeterred.

The lonely Tod quickly finds love with Vixey, a female fox, but their happiness is disturbed when Slade and Copper trespass onto the preserve and start hunting for Tod. They find him and Vixey, but while trying to get them, they accidentally antagonize a bear. Slade gets his foot caught in one of his own traps and loses his shotgun, and Copper tries to fight the bear, but he is no match for it. After hearing Copper’s cries of pain, Tod decides to come to his aid, and he saves him before the bear can kill him. Tod battles the bear until they both plummet down the reserve’s waterfall.

Tod survives the fall, and a concerned Copper finds him crawling exhaustedly to shore. Slade then appears and aims his gun at Tod, but Copper – knowing now that Tod is truly his friend – stands in front of Tod to protect him, and refuses to move aside. Slade soon understands that Copper cares about Tod, so he lowers his gun and tells Copper they’re going home. Before Copper leaves, he and Tod share one last smile.

Later, Tweed is shown bandaging Slade’s foot at his home while Chief and Copper rest nearby. Copper remembers the promise he made with Tod during their youth where they said they would be friends forever, and smiles, and the movie closes with Vixey joining Tod while he is looking down from a nearby hill at the homes of Tweed and Copper. 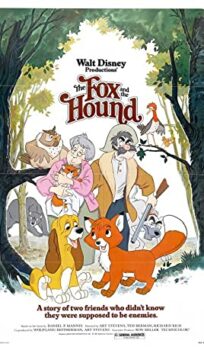