Clark Kellogg (Matthew Broderick) is a new student at NYU. He is the step-son of a lawyer who is also a rabid environmentalist. He is immediately robbed upon arriving in NYC by Victor Ray (Bruno Kirby). Clark manages to track Victor down, and to make it up to Clark, Victor promises to get Clark a VERY lucrative job as a transporter with his uncle, Carmine Sabatini (Marlon Brando – doing an impersonation of his own role from The Godfather).

After a series of misadventures, Clark manages to get himself engaged to Carmine’s daughter Tina (Penelope Ann Miller). He also discovers that Carmine runs a club where wealthy patrons pay tens of thousands of dollars to eat endangered species that are smuggled into the country by Carmine and transported by Clark. Clark’s step-father discovers that Clark is involved in this operation, and turns him into the FDA, but the FDA agents assigned to the case are actually working for one of Carmine’s rivals.

After watching the Godfather in his film classes, Clark decides his loyalties lie with Carmine and he warns him that the FDA is on to his operations. They develop a plan to allow Carmine to escape jail AND get out of the business of importing endangered species for consumption. The FDA agents bust the club, and they seemingly witness Clark fatally shoot Carmine. The FDA agents then try to abscond with the money raised from all the diners, but Carmine had secretly tipped off the FBI to the crooked actions of the agents and the FBI end up arresting them. Since it is reported that Carmine is dead, he can get out of the business. It is also revealed that Carmine never actually served the diners any of the endangered species, and actually had been serving the diners smoked turkey mixed with veal and had actually donated the animals to the Bronx zoo. Clark discovered that the entire series of events had been set up by Carmine and Tina, who knew that his step-dad would contact the FDA. Nonetheless, Tina and Clark decide to actually date each other, and Clark asks to stay in Carmine’s employ. 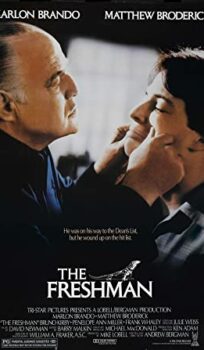