Hildy Johnson (Jack Lemmon) is the top reporter for the Chicago Examiner in 1929. Hildy has decided to “escape” the journalism business to marry his girlfriend Peggy (Susan Sarandon). His editor, Walter (Walter Matthau) is desperate to make sure Hildy doesn’t leave as the story of the decade – the execution of cop-killer Earl Williams (Austin Pendleton) – is the same day as Hildy’s wedding. Hildy swings by the prison where all of his journalist buddies are convened to cover the story in order to say good bye, when Earl escapes. Hildy becomes the only reporter who discovers that Earl is hiding in the prison, and because of how big the story is, he decides to cover the story and misses the train to Philadelphia where Peggy awaits. Hildy and Walter attempt to smuggle Earl out of the prison, but are eventually caught and placed in jail.

Once in jail, Hildy and Walter discover that the Sheriff and the Mayor are purposefully ignoring the governor’s pardon of Earl because they believe that Earl’s execution will help them get reelected. Walter uses this information to blackmail the Sheriff and the Mayor to letting them out of jail. Walter also uses the information to have the mayor order the last train to Philadelphia to wait for Hildy. Walter gives Hildy his watch as a “wedding present.” After the train departs, Walter calls the police at the train’s next station and claims that Hildy stole his watch so the police will arrest him and bring him back to Chicago.

Hildy ends up missing his wedding and re-devoting himself to his job as a reporter. Earl is let free and marries his prostitute girlfriend Mollie (Carol Burnett), the sheriff ends up being jailed, and the Mayor ends up becoming a US congressman. 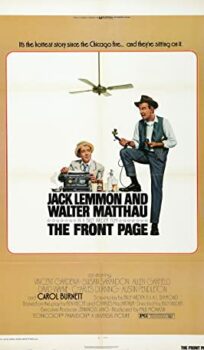