Short pooper:
Gary Hart (Hugh Jackman) decides to end his run for the Democratic Presidential nomination, overwhelmed by the scandalous media scrutiny that resulted from his liaison with Donna Rice (Sara Paxton). He and his wife Lee (Vera Farmiga) have, nonetheless, remained married.

Long version:
At a press conference in New Hampshire, and despite what seemed to be a high public support for the belief that the Miami Herald went too far by running the story about Hart and Donna Rice, while Hart attempts to address points related to what his Presidential plan of action would be, he still finds himself indirectly questioned regarding Rice by the likes of David Broder (John Bedford Lloyd) from the Washington Post, and Bob Martindale (Kevin Pollak) from the Miami Herald. It is, however, A.J. Parker (Mamoudou Athie), also from the Post -and who appeared, all along, as one of the most fervent defenders of one’s right to a private life, even as a public figure of high caliber-, who delivers the coup de grace by asking Hart a direct question of whether he committed adultery; Hart finds himself stonewalled and alludes it wasn’t a fair question, thus completely bringing down the image he had struggled so hard to maintain. Later, Parker tries to obtain from Hart’s campaign staffers a comment regarding the anonymous pictures published by The Post, only to be coldly turned away.

Feeling he had irreversibly damaged his chances for the Presidency, Hart decides to end his run for the Democratic nomination. He issues a formal statement (which is heard in voice-over) where he also states that he can’t bring himself to become “the issue”, referring to the way in which the media excoriated him for his private life actions while completely overlooking what seemed to be his virtues and intentions as President. Everyone who worked with him is seen saddened and dejected by the turn of events. As the movie ends, a title card informs that, to this day, Hart and his wife Lee are still together.

It is to be noted that the Gary Hart incident became the turning point for people running for office (or already in office, for that matter) to also fall under the inquisitive (and often image-assassinating) public eye for their actions, both past and present. 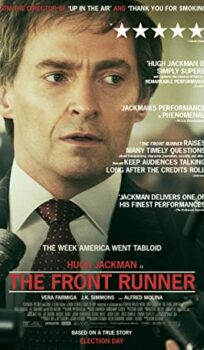