Childress (John Cassevetes) arranges a phoney assassination attempt on his friend and fellow CIA agent, Peter Sandza (Kirk Douglas), so he can kidnap his son Robin who has displayed psychic powers. Eventually Peter tracks down another psychic, a girl called Gillian (Amy Irving) and helps her escape from the Paragon Institute where she had been tutored in developing her powers. Paragon was run by Childress and Gillian had picked up psychic traces of Robin whilst he was there.

Robin, who has been told his father was dead, has become jealous and possessive as his powers grow and kills his lover Susan with his telekinetic powers. He attacks Peter and they both fall out a window. Peter grabs Robin whilst still on the roof and tries to pull him to safety but Robin claws at his face making Peter let go. Robin falls to his death but lives long enough to seemingly transfer some of his power to Gillian. Peter also falls to his death.

Gillian awakes in bed with Childress trying to talk her into joining his program but she uses her psychic powers to blind him and then making him completely explode. 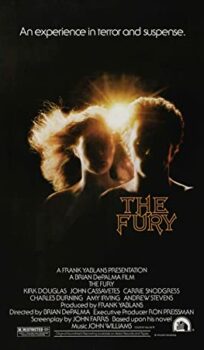