As Tangerine (Katie Barberi) is in the antique store’s basement collecting the clothes the Garbage Pail Kids have made for her fashion show (which she is passing off as her own creations), the Kids tell Tangerine that they want to attend the event. Tangerine responds by secretly locking them in the basement, telling Dodger (Mackenzie Astin) that she is doing it so they can’t be seen and taken to the State Home for the Ugly. Once they get to the department store where the show is being held, Tangerine sends Dodger inside to start setting up and then contacts Juice (Ron MacLachlan), Wally (J.P. Amateau), and Blythe (Marjory Graue) and tells them about the Kids. They go to the antiques store, sedate Captain Manzini (Anthony Newley), and then capture the Kids and drop them off at the State Home, where they are soon scheduled to be executed.

The thugs then go to the fashion show themselves and find Dodger and Tangerine, and after telling Dodger that they found out about the Kids, he realizes Tangerine double-crossed them and demands to know where they are. After she reveals their location, Wally and Blythe grab Dodger and toss him into a dumpster, but he gets out after they go away and heads straight for the State Home. Upon arrival, he sees Manzini getting thrown out by the guards in a failed attempt to have the Kids released, and after he warns Dodger of how something bad was likely going to befall them soon, Dodger heads down to The Toughest Bar In The World and secures the aid of the bikers there, for they had befriended the Kids earlier in the movie, and Manzini sneaks into the building to free the Kids. He succeeds in this task, and the Kids free the other inmates, and then the bikers appear and rip the bars off of one of the windows with steel chains attached to their motorcycles. They then help Manzini, the Kids, and the inmates escape, and after they motor off, the Kids decide to crash the fashion show.

They sneak in, but they soon reveal themselves to all of the “normies” (their slang word for “normal people”) present and stir up mayhem, disrobing the models and scaring off the audience with their gross-out behavior. They also subdue Wally and Blythe, and Dodger fights Juice one-on-one. After some assistance from the Kids, Dodger gets on top of Juice and starts hitting him unmercifully, but Manzini stops Dodger and calms him down, and Dodger decides that beating up Juice just isn’t worth the hassle.

Dodger returns to the antiques store and finds Tangerine waiting outside for him. She tries to apologize for everything and asks if they can just be friends, but Dodger opts to dissociate himself from her. Later on, Manzini gets the Kids together and tries to play the Kids’ song backwards to get them to go back into their garbage pail, but they leave the store instead. Manzini and Dodger then watch with amusement as they go off to cause more mischief. 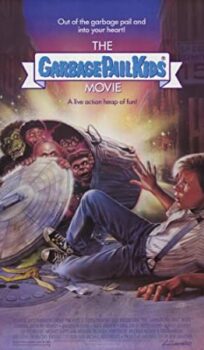