Remington (Michael Douglas) finally kills one of the two man-eating lions. During the night Patterson (Val Kilmer) dreams that his wife and child come to visit him, only to be attacked by the other lion. When he awakes from the nightmare, he learns that Remington was dragged from his tent in the night by the remaining lion, and has been killed.

In grief and anger, Patterson burns all the grass around the camp and drives the lion towards him in order to ambush it. He and Samuel (John Kani) fight the lion, and eventually Patterson shoots and kills him. The film ends with Patterson being reunited in Africa with his wife and baby (with the bridge being completed on time), and a narration from Samuel saying that the bodies of the lions can now be seen in Chicago’s field museum. 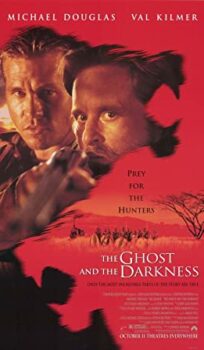