Rachel (Emily Blunt) is an alcoholic whose violent outbreaks during blackouts led her husband to cheat on her and divorce her.  She has lost her job but still takes the train to the city every day, where she looks out at her old neighborhood and makes up a personal history for a married couple she sees as she passes.  After she sees the woman kissing another man, Rachel becomes infuriated as it reminds her of her husband cheating on her.

Intoxicated, she gets off of the stop to talk some sense into the woman and finds herself attacked with no memory of the night before.  When the police suspect her of killing the woman, she goes to the woman’s husband and tells him of the man she saw the wife kissing from the train.

As Rachel tries to solve the mystery of what happened that night, she learns that her ex-husband was having an affair with the murdered woman, who worked temporarily as a nanny for him and his new wife.  He was the one who killed her when she revealed she was pregnant with his child.

Rachel is almost killed by her ex-husband when she goes to her former house to warn his current wife but Rachel kills him first, in self-defense. 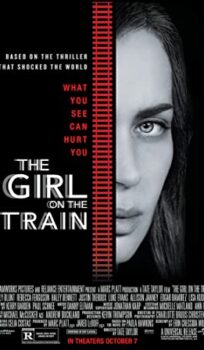