Lisbeth Salander (Noomi Rapace) is placed on trial for the attempted murder of her father Alexander “Zala” Zalachenko (Georgi Staykov).  Zala was under protection by a secret group called The Section, who decided to kill him when he threatened to talk.

It is the goal of the prosecution to have Lisbeth re-admitted into the mental installtution headed by Dr. Peter Teleborian (Anders Ahlbom).  Lisbeth’s hacker friend Plague hacks into Teleborian’s laptop and not only finds enough evidence to clear Lisbeth’s name and capture The Section, but also discovers that Teleborian is pedophile.

As a witness, Mikael Blomkvist (Michael Nyqvist) reveals the evidence that Teleborian wrote his psychiatric evaluation of Lisbeth BEFORE he even met with her.  At the same time, the police raid and arrest the member of The Section, and Teleborian is also arrested for the possession of over 9000 items of child pornography.  It is then decided by the court that Lisbeth no longer needs to remain in custody.

Lisbeth later finds out that she inherited a warehouse from her farther.  She goes to check it out and finds Niedermann (Micke Spreitz), who was a fugitive for the whole film, waiting for her.  Lisbeth evades Niedermann and ends up using a nail gun to nail his feet to the floor.  She then calls a biker gang with a vendetta against Niedermann (for killing one of their members earlier in the film) to come and finish off Niedermann.  After the biker gang arrives, she then calls the police to come after the gang.

Mikael later comes by Lisbeth’s place to tell her that Niedermann is dead and the bikers have been arrested.  They each say their thanks to each other and promise to stay in touch. 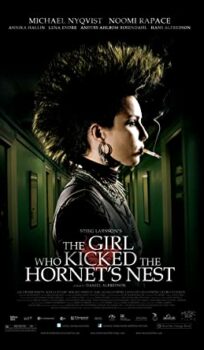