Pooper:
Spot is reunited with his human family and Arlo makes it home to his family.

Long Ending:
This film takes place in an alternate Earth where dinosaurs did not go extinct and continued to evolve to the point where they formed families, became domesticated, and could speak. Two Apatosaurus (Jeffrey Wright and Frances McDormand) dinosaurs start a small farm and family. The children are Buck, Libby, and the runt – Arlo (Raymond Ochoa). While Buck and Libby take to the farming life, Arlo is cowardly and incapable of completing the most menial of tasks.

Arlo is eventually tasked with setting a trap and kill a critter that is eating the corn being stored for winter. Arlo manages to catch the critter, which is revealed to be a dog-like human child (Jack Bright). Arlo is unable to follow through and kill the child, so he lets the child go. Arlo’s dad observes this and forces Arlo to join him in pursuit of the child (desperately wanting Arlo to finish a task assigned to him). As they track the child, a massive storm breaks out. The dad realizes he has pushed Arlo too hard and they begin to return to the farm. Along the way, a massive mudslide bears down on the pair. The dad sacrifices himself to save Arlo.

Later on in the year, the family is struggling to store enough crops for winter. Arlo spies the human child once again stealing their corn and pursues him. The two fall into the nearby river and are swept away from the farm by the strong current. Arlo is ill-suited to survive in the wild, but the child begins nurturing him by finding food and shelter. The pair bond and Arlo names the child Spot.

As they attempt the journey back to Arlo’s home, they are accosted by psychotic nyctosauruses (the leader voiced by Steve Zahn) that try to eat Spot. They later befriend a trio of T-Rex ranchers (voiced by Sam Elliott, Anna Paquin, and A.J. Buckley) who are feuding with a pack of velociraptors (including John Ratzenberger). The T-Rexes help Arlo develop self-confidence and find a landmark that directs Arlo back to his home. As Arlo and Spot split from the T-Rexes to return to Arlo’s farm, they encounter a group of humans. Though Spot expresses a desire to meet the humans, Arlo refuses to let him go.

As they approach the home, a huge storm breaks out. The nyctosauruses fly through the storm and abduct Spot. Arlo passes out during the attack and is visited by his Father’s spirit. His dad’s spirit gives Arlo his blessing and approval. With that, Arlo wakes up, faces his fear of the storm, and rescues Spot from both the nyctosauruses and a mud slide.

When the storm ends, the humans once again approach the pair and Arlo realizes these humans are Spot’s family. This time, Arlo lets Spot go back to his family after a tearful good bye. Arlo then makes his way home to the farm where his mother and siblings give him a tearful welcome. 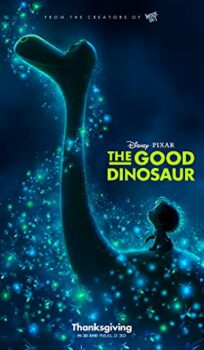