Mamere (Arnold Ceng) decides to travel back to Kenya, determined to reach the Kakuma Refugee Camp and find his long-lost brother Theo (Femi Oguns). After some unsuccessful digging, he comes across a common friend, James (Elikana Jale), who leads him to Theo and they have an emotional reunion.

Then, Mamere tries to obtain paperwork for Theo to be able to leave Kenya with him, to no avail, all the while making his brother believe he succeeded in doing so. However, come the time to board a plane, Mamere reveals that, in gratitude for the debt of life he and his other brothers had with Theo, he’d sacrifice by giving Theo his passport so he could meet them all in the United States -when Theo objects that it is a lie, Mamere answers that “it is a good lie”-; they sadly part ways.

The final sequences of the film show Theo happily reconnecting with the rest of the group in the United States; Jeremiah (Ger Duany) telling the story of the Lost Boys of Sudan, as a guest speaker, in front of the same Congregation Carrie (Reese Witherspoon) belonged to; Mamere communicating, by phone, his decision to a saddened Carrie; and Mamere reminiscing of his childhood in Sudan, while hopefully looking towards his choice of returning to Kakuma, to work at their hospital. 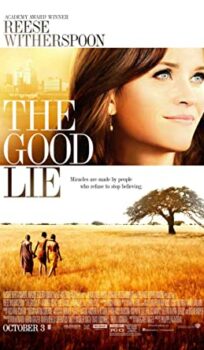