POOPER: (Thanks Drummer Brian)
The Goonies find One-Eyed Willie’s ship and the treasure.  Although the Fratelli’s attempt to take all the loot from the kids, they fail to check Mikey’s (Sean Astin) marble bag which is full of gems, which is enough to save everyone’s homes.  The Fratelli’s are arrested and Sloth (John Matuszak) goes to live with Chunk (Jeff Cohen).  One-Eyed Willie’s ship sails off into the sunset.

LONG ENDING:
The film opens with criminals Mama Fratelli (Anne Ramsey) and her son Francis (Joe Pantoliano) breaking Mama’s other son Jake (Robert Davi) out of jail. The family of crooks successfully escape from the police to an abandoned restaurant just outside of the Goon Docks, a sea town in Oregon.

The town is being purchased by a wealthy businessman who intends to raze the homes for a new golf course. A bunch of pre-teen boys, nicknamed the Goonies, are hanging out one last time. The Goonies consist of Mikey (Sean Astin), Chunk (Jeff Cohen), Mouth (Corey Feldman), and Data (Ke Huy Quan). While playing in Mikey’s attic, they find a treasure map and a doubloon that belonged to the notorious pirate One-Eyed Willy. Legend says that Willy hid his treasure somewhere below the Goon Docks. The Goonies tie-up Mikey’s older teenage brother Brand (Josh Brolin) and hop on their bikes to seek out the treasure.

The map leads the Goonies to the abandoned restaurant where the Fratellis are hiding. Brand soon escapes his restraints and follows after them. Along the way, he is harassed by bully/son of the man buying up the town named Troy (Steve Antin). Andy (Kerri Green) and Stef (Martha Plimpton), two other teens, abandon Troy over his boorish and sexist behavior to go with Brand to find the Goonies. It’s clear that Andy has a crush on Brand. The teens eventually find the Goonies in the basement of the restaurant. There, they discover the Fratellis are printing counterfeit money and find the corpse of a man they killed. They also find a deformed man chained in another room of the basement. Mikey finds a passage to subterranean tunnels and tries to convince everyone to go down there in search of pirate treasure. As they argue, the Fratellis return to their hideout. The kids are forced to go into the tunnels, but Chunk is unable to make it down there in time and is captured by the villains.

The Goonies begin searching for the treasure in earnest, encountering many deadly booby traps. At one point, they have the opportunity for Troy to rescue them by lifting them out of a well shaft. Mikey makes a speech telling the others that if they abandon the search for the treasure, the town will be lost but as long as they believe, there is a chance they can recover the treasure and stay together (telling everyone it is “our time!”). All the kids eventually reject Troy’s assistance, which results in Andy, Brand and Stef being officially included as members of the Goonies.

The Fratellis interrogate Chunk as to the whereabouts of the other kids and eventually follow the Goonies into the tunnels. Before they leave, the Fratellis lock Chunk in a room with the deformed man. Chunk learns that the man’s name is Sloth (John Matuszak) and is the third Fratelli brother. Despite his scary exterior, Sloth is loving and loyal. The pair bond and Sloth soon breaks them free. The pair also go into the tunnels to save the Goonies from the other Fratellis.

Eventually, the Goonies make it past all the traps and find One-Eyed Willy’s pirate ship. As they celebrate, the Fratellis finally catch up and take the kids hostage. The Fratellis greedily begin taking all the treasure for themselves and, in so doing, activate a trap that begins causing a cave-in. Sloth and Chunk arrive and beat up the Fratellis and release the Goonies. Eventually, everyone escapes the cave alive, but the Goonies don’t have any of the treasure.

The Goonies’ parents and the police arrive at the beach and apprehend the Fratellis. The Goonies stop the police from arresting Sloth, explaining he’s a good guy and one of them. Troy’s father shows up to force the townsfolk to sign their deeds to him when Mikey remembers he put some jewels into his marble bag and the Fratellis didn’t think to take the bag from him when they captured the kids. The jewels are valuable enough to allow all the families to pay off their debts and keep their homes. As Troy and his father skulk away, Chunk tells Sloth that he can live with him and his family (and join the Goonies) and Brand and Andy finally kiss. As the families celebrate, One-Eyed Willy’s ship mysteriously sails out to sea in full view of all onlookers, proving that the Goonies’ tale was real. 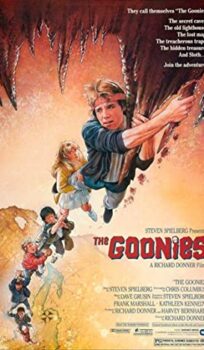