Elaine Robinson (Katherine Ross) is pressured by her parents to marry fiance after the affair between Benjamin Braddock (Dustin Hoffman) and Mrs. Robinson (Anne Bancroft) becomes public. Benjamin arrives at the church just after the vows are exchanged; locked out, he stands in a glassed-in balcony and pounds on the glass, crying out “Elaine”. When she responds to him, Benjamin rushes downstairs, fights off the enraged families, and escapes with Elaine. They run to a bus and get on. Still wearing her wedding dress, Elaine moves to the back of the bus with Benjamin. As the bus drives away, they smile at each other, then look both look ahead pensively. 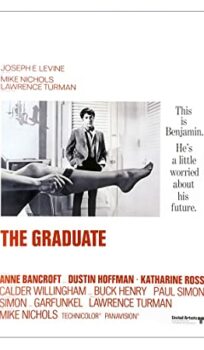