John Ford’s masterpiece based on the book by John Steinbeck about the plight of the Okies.

Henry Fonda is released from prison in Oklahoma during the depression and makes his way back to his family. After picking up an ex-preacher, John Carradine, he learns that the family farm has been foreclosed on and the only choice is to go to California. After a hard trip they learn that things are not easy in California and the family struggles to survive. Henry Fonda goes to a secret meeting of striking workers where John Carradine is killed by men sent to break the strike. Henry Fonda kills one of the attackers but is scarred in the process. Ultimately, Henry Fonda leaves his family to fight for social reform saying “I’ll be all around in the dark. I’ll be everywhere. Wherever you can look, wherever there’s a fight, so hungry people can eat, I’ll be there. Wherever there’s a cop beatin’ up a guy, I’ll be there. I’ll be in the way guys yell when they’re mad. I’ll be in the way kids laugh when they’re hungry and they know supper’s ready, and when our people eat the stuff they raise and live in the houses they build, I’ll be there, too.” 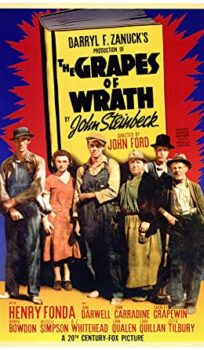