Pooper:
Basil foils Ratigan’s plan and after a fight, Ratigan falls to his death. Olivia is reunited with her father, Basil receives recognition from the Queen and Basil invites Dawson to be his partner.

Long Ending:
The film begins with toymaker Hiram Flaversham giving a robotic-toy to his daughter, Olivia (voiced by Susanne Pollatschek). Soon after, a peg-legged bat named Fidget (voiced by Candy Candido) bursts in and abducts Hiram, though he manages to hide Olivia before he is captured.

Olivia journeys to London in hopes of finding the great mouse detective, Basil (voiced by Barrie Ingham). On her journey, she meets Dr. David Q. Dawson, who helps her find Basil’s house. At first, Basil is wholly uninterested in helping Olivia. Then, Basil deduces that Fidget is working for his arch-nemesis, the evil Professor Ratigan (voiced by Vincent Price) and agrees to take the case.

Ratigan is the head of the criminal underworld, often feeding his employees to a fat cat if they fail him. He needs Hiram to help him with a mysterious scheme, although Hiram refuses to help. Meanwhile, Ratigan sends Fidget out to retrieve some gears, military uniforms and Hiram’s daughter (who he will hold hostage and force Hiram to take part in his plan).

Meanwhile, the heroic trio, using the help of a dog who is friends with Basil, track Fidget’s scent to a local toy warehouse. They have a confrontation with Fidget, who gains the upper hand and manages to get away with the gears, uniforms, and Olivia. Fidget does, however, leave behind a clue that allows Basil to determine the general vicinity of Ratigan’s HQ. Meanwhile, Hiram agrees to help Ratigan after discovering that he is holding his daughter hostage.

Dressing his henchmen in the soldier’s uniforms, Ratigan infiltrates the royal palace and kidnaps the Queen and replaces her with a robotic double built by Hiram. The robotic Queen publicly proclaims Ratigan as her royal consort and puts him in charge of the country.

Moments later, Dawson and Basil burst in, free Hiram and the real Queen, and expose the fake Queen as a robot. A fight ensues, with Basil’s dog scaring off Ratigan’s cat and Ratigan discarding Fidget for failing him. Ratigan kidnaps Olivia again and escapes in a homemade blimp, with Basil, Dawson and Hiram in hot pursuit in a balloon.

A final confrontation occurs on top of Big Ben. Basil saves Olivia and manages to get her safely on the balloon, but is then attacked by Ratigan. After a scuffle, Ratigan and Basil tumble off the clock tower, smashing through Ratigan’s blimp and seemingly falling to their deaths below. After a short lull, Basil reappears, having been saved by converting some of the broken pieces of the blimp into a makeshift helicopter.

Olivia and Hiram are finally reunited and after thanking Basil and Dawson, return home. Basil gets an award for his service to the throne. As Dawson prepares to leave, a new client arrives at Basil’s house and Basil asks Dawson to join him permanently as a partner for his detective agency, an offer that Dawson happily accepts. 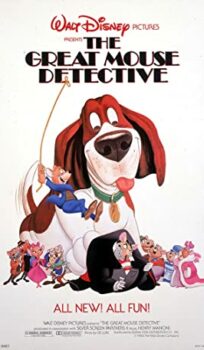