The Muppets in this film break the 4th wall and acknowledge they are making a movie. At one point, Kermit tells Ms. Piggy to stop “hamming it up” with her acting.

The film follows twins Kermit the Frog (voiced by Jim Henson) and Fozzie Bear (voiced by Frank Oz) as they try to save their jobs as reporters. They convince their newspaper editor to give them one last chance to get a big story by sending them to London to investigate threats made against famous fashion designer Lady Holiday (Diana Rigg). The rumor is that thieves are out to steal her valuable “baseball diamond.” The duo and their photographer Gonzo (voiced by Dave Goelz) head off to London.

Once there, the trio take up residence in the “Happiness Hotel,” a derelict building populated by various other downtrodden Muppet characters. Meanwhile, Lady Holiday hires aspiring model Ms. Piggy (voiced by Frank Oz) as her assistant. Kermit goes to interview Lady Holiday and mistakes Miss Piggy as Lady Holiday. Miss Piggy does not correct Kermit’s mistake and sparks fly between the two. Kermit asks Miss Piggy out to dinner. On the date, Miss Piggy meets Lady Holiday’s brother Nicky (Charles Grodin). Nicky falls in love with Miss Piggy as well. Nicky is also the leader of the gang of thieves that intend to steal the baseball diamond. He frames Miss Piggy for theft of some of Lady Holiday’s jewelry so that the police stop guarding the baseball diamond. Miss Piggy’s lies about her identity are also exposed to Kermit.

Gonzo overhears Nicky bragging about his crimes and plans to steal the baseball diamond. He and the Muppets go off to thwart Nicky’s heist. Miss Piggy escapes prison and goes off to aid Kermit and the gang. A fight breaks out between the Muppets and Nicky’s gang of thieves. Nicky gains the upper hand until Miss Piggy arrives and beats up all the gang. Nicky professes his love for her, but she chooses to be with Kermit (who forgives her for her earlier lies). The police arrive and arrest Nicky and his gang (thus exonerating Miss Piggy).

Kermit and Fozzie’s careers are saved and the Muppets and Miss Piggy decide to move to America with them. 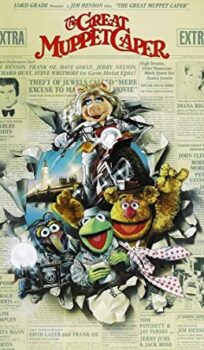