Jack Jefferson (James Earl Jones), the first black man to win the heavyweight boxing title, is harrassed by the American government for years. He’s arrested for violating the Mann Act, and driven into exile in Europe. Even black American leaders won’t take his side, because they disapprove of his hedonistic lifestyle and pursuit of white women.

The boxing establishment repeatedly leans on Jefferson to take a dive and give up his title. Even his white common law wife Eleanor (Jane Alexander) wants him to take a dive. But Jefferson is too rpoud to do so, and she leaves him.

Jefferson must defend his title in Havana, Cuba, against “The Kid” (played by real-life boxer Jim Beattie), a huge white boxer. The fight goes on for 26 rounds. All through the fight, a little black boy watches from ringside, rooting for Jack. After being knocked down in the 26th round, Jefferson stays down- he seems to have given up the fight deliberately. The Kid becomes the new heavyweight champion.

As Jefferson walks back to the locker room, the little black boy spits on him and runs away.

P.S. The movie and play “The Great White Hope” were based on the real life heavyweight boxer Jack Johnson. The Kid was based on Jess WIllard, the 6’6″ former cowboy who took his title. Years after their fight, Johnson claimed to have taken a dive. Willard always laughed “If he was gonna take a dive, I wish he’d done it a lot earlier.” 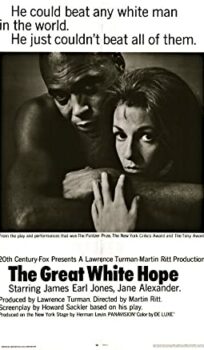