Charlton Heston and Jimmy Stewart in Cecil B. DeMille’s Oscar winning best picture that featured many performers from the Ringling Bros Barnum & Bailey circus as themselves.

Brad (Charlton Heston) manages a traveling circus. The financial people want to cut the season short due to the bad economy and only go on tour for 8 weeks. Brad knows his performs need the income, and fights for the full schedule. The only way he can get the full schedule is hiring world famous trapeze artist The Great Sebastian. This is a problem because Brad’s romantic interest Holly will lose top billing and center ring to Sebastian. Holly is determined to win center ring back. Sebastian and Holly enter in a competitive battle with each trying more daring and dangerous stunts.

In the side plot, Buttons the clown (Jimmy Stewart) always wears his clown make up, whether or not he is performing, and always goes by Buttons, with no one knowing his real name. Holly sees a news article about a doctor on the run after killing his wife. She notes similarities between Buttons and the doctor.

Holly taunts Sebastian about their stunts, and in response Sebastian cuts down his trampoline. He falls with no trampoline to catch him and is severely injured. When Sebastian returns crippled from the hospital, Holly feels guilty. She says she loves him, and they become a pair. Brad is now available, and Angel goes after him. Animal trainer Klaus had considered Angel to be his girl and is infuriated. During the animal show, he threatens to have an elephant crush Angel and make it look like an accident. Brad calls off the elephant and fires Klaus on the spot.

Klaus is out for revenge. Klaus knows where the money is hidden on the circus train. He puts flares to stop the circus train, and steals the cash. However, another train is coming fast behind the circus train. Klaus turns his getaway car onto the tracks, flashing the lights, to stop the 2nd train. The train does not stop in time, killing Klaus and smashing into the back of the circus train. (While boarding the train a police detective told Brad that they have evidence the doctor/murderer is traveling with their circus. He is going to ride the train with them to the next town to fingerprint everyone in the circus.)

Chaos erupts after the train crash, with many injured performers, broken equipment, and lions tigers and other animals on the loose. Brad is obsessed that they must make their next performance or the financial people will shut them down. Brad has a severed artery, and is bleeding heavily. Holly realizes that Buttons is the fugitive surgeon, and begs him to save Brad. Buttons sutures the artery, and gives Brad a transfusion, revealing to the police that he is the doctor they are after.

With Brad unconscious, Holly becomes obsessed with keeping the circus going. With the damage to the train, they realize there is no way they can reach the next town. Holly decides that if they can not get to town, they will bring the town to them.

They have a huge parade through the center of town, and invite the townspeople to follow them. The circus is set up at the crash site, and a huge crowd comes. Brad and Holly realize they love each other. With Brad and Angela taken, Sebastian and Angel pair up. 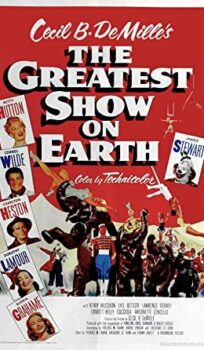