This is an homage to Cannibal horror/gore movies of the 70s and 80s, and its plot actually shares a lot with that of “Cannibal ferox”, sequel to the notorious “Cannibal Holocaust”.

Short version:
Everyone, except for Justine (Lorenza Izzy) and Alejandro (Ariel Levy), dies; Alejandro’s fate, however, is left somewhat ambiguous.

After an explosion sends their plane crashing onto the middle of the jungle, the members of the group start dying, one after the other, in various circumstances; mostly, at the hands of the cannibal tribe they were vouching for with their protest in the first place:

Eventually, Justine is found (and almost killed) by militia fighting off the villagers, and taken to safety.  She makes it back to New York and lies about the whole experience, alluding that she was the sole survivor of the crash and, thanks to the villagers, she was able to return safe and sound.  In the end, she despondently notices more people doing activism on campus, while wearing T-shirts with Alejandro’s face on it, as if he were some sort of a martyr, when, in reality, he was playing everyone all along, for his own selfish purposes.

A mid-credits scene shows a phone conversation between Justine and a sister of Alejandro, while a zooming satellite image shows Alejandro, covered in black, standing in the middle of the jungle.  It is not made clear whether he had become the tribe’s new henchman (like the bald, yellow-head hunter from before) or if he was doomed to die at their hands. 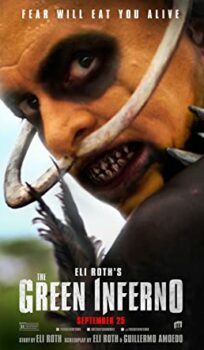