Pooper:
Gawain finally realizes that a life without honor is worse than death and removes the magic sash that will keep him safe from harm. The Green Knight congratulates Gawain on his honor before preparing to cut off Gawain’s head.

Long Ending:
The film retells a version of the story of Sir Gawain and the Green Knight. This telling opens on Christmas as Gawain (Dev Patel) spends the morning with his prostitute lover Essel (Alicia Vikander) before visiting his mother (Sarita Choudhury). He then visits his uncle, the King (Sean Harris). The King apologizes to Gawain for not being more present in his life as the feast begins and his knights sit at a round table. When the King asks Gawain to tell him a story of adventure, Gawain ashamedly admits he’s never engaged in adventure. Meanwhile, Gawain’s mother engages in a witchcraft ritual. A Green Knight (Ralph Inneson) made out of wood suddenly bursts into the King’s chamber and possesses the Queen (Kate Dickie) (it’s implied Gawain’s mother sent the knight). Through the Queen, the Green Knight proposes a game wherein he will allow anyone in attendance to strike him so long as one year later the person that strikes him agrees to receive the same blow in return. Gawain alone steps up to the challenge. The King lends him his sword and Gawain decapitates the Green Knight. To his horror, the Green Knight picks up his severed head. As the Knight rides away, he reiterates that Gawain must meet him in his Green Chapel one year hence to be decapitated.

Gawain becomes a legend after this incident. Before he knows it, Christmas approaches again. The King and Queen encourage him to fulfill his promise and give him their blessing and a promise that he will be by their side if he survives. Essel declares her love for him and pleads with Gawain not to go, but he rejects her plea and does not reciprocate her love. His mother tells him not to waste this opportunity and gives Gawain a magic green sash that she says will protect him from harm. Reluctantly, Gawain sets off on his journey to the Green Chapel.

Soon after setting off, he is robbed and humiliated by a trio of brigands. They take his horse, money, and sash his mother gave him. He then meets a ghost who gets him to recover her head from the bottom of a pond and gives him some clues about the Green Knight’s nature in return. He befriends a fox and survives wind, rain, and hunger. Gawain also happens upon a group of giants as they travel across the desolate plains.

Eventually, Gawain arrives at the estate of a mysterious Lord (Joel Edgerton), his wife the Lady (also played by Alicia Vikander), and a mysterious old woman (who bears the same signs of witchcraft as his mother). The Lord informs Gawain that his home is located near the Green Chapel. They also agree that the Lord will provide Gawain with the best cuts of meat that he hunts in the forest if Gawain gives him anything he receives in the castle.

Gawain awakens the day before his meeting at the Green Chapel to find the Lady in his room. She bears the same magical sash his mother gave him and reiterates that if he wears it, no harm can come to him. She then successfully seduces him (and he takes the sash) before insulting him for his lack of honor. Gawain flees the castle and meets the Lord in the woods. The Lord asks if Gawain has anything to give him in accordance with their bargain (obviously referring to the sash, and possibly the sex he had with the Lady), but Gawain lies and says he has nothing for the Lord before they part ways. The fox suddenly talks to Gawain and tells him not to go to the Green Chapel, but Gawain chases the fox away before continuing onwards.

Gawain finds the Green Knight in a magical slumber in the Green Chapel. As he stares at the knight’s face, it takes on the visage of many of the people he knows. Finally, the Green Knight arrives and asks if Gawain is ready to receive his blow. Although Gawain initially agrees to receiving the blow, he eventually flees in terror. Gawain returns home where people believe he heroically survived. The King names Gawain his successor before he dies and he makes love to Essel. However, Gawain is not able to recover from his inner shame or ever take off the sash he got from the Lady’s daughter. Misfortune strikes as he abandons Essel after she gives birth to their son. As king, he is defeated in battle and his son is killed. Although he has a daughter with his new wife, they are forced to flee when his kingdom is overrun by invaders. Gawain finally dies when he removes the sash and his head falls off from the Green Knight’s blow.

Gawain’s future is revealed to be a vision he has in the Green Chapel. Finally realizing that a life without honor is worse than death, he removes the sash from his waist. The Green Knight expresses pride in Gawain removing the sash, and then prepares to decapitate him. The film ends with Gawain’s fate unclear.

After the credits, a young girl plays with the King’s crown before putting it on her head. 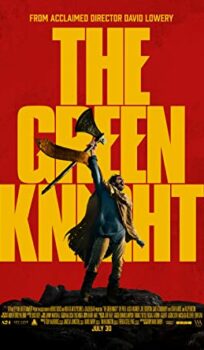