Short pooper:
David (Dan Stevens) is a highly lethal, cunning, and ruthless programmed assassin, the product of a military experiment conducted by the private Corporation KPG. Upon being found out and discovered, he starts killing everyone around him -Laura (Sheila Kelley), Spencer (Leland Orser), Kristen (Tabatha Shaun), Higgins (Ethan Embry), and many more-, and even frames Anna’s boyfriend, Zeke (Chase Williamson), for Higgins’ murder, to cover his tracks. At the end, when it seems he will kill Anna, her younger brother Luke (Brendan Meyer) stabs him. It looks like he dies but as police and firefighters arrive at the location to assist, he is seen sneaking away in a firefighter uniform, having survived his wounds.

Longer version:
After Anna’s phone call to the military base where David claimed to come from, the information gets all the way to a Major Carver (Lance Reddick), who immediately gathers a special team and goes to the Peterson house to try and prevent them. Meanwhile, Luke, having dodged getting expelled -and, instead, just having received detention as a result of David blackmailing the Principal- for defending himself from one of the bullies, shares with David the information discovered between himself and Anna, but promises secrecy.

Eventually, Carver and the soldiers arrive at the Petersons’ and, when David realizes he has been discovered, a massive gunfight ensues. Seeing Laura has figured him out, he discloses his taking part -along with Laura’s dead oldest son, Caleb- in the secret experiment that turned him into a killing machine and apologizes before murdering her with a kitchen knife and escaping.

Now a fugitive, he catches wind of Spencer, who is driving back to the house, and kills him by causing a head-on collision and then shooting him. After this, he goes to the restaurant where Anna works with the intention of killing her, too; but, instead, shoots her friend and fellow worker Kristen and blows up the place with two grenades -Carver had actually arrived briefly before this happened and took Anna away, with the intention of trying to save Luke, at school-.

They catch up with Luke, who is serving detention, helping organize the Halloween event at the High School Gym under a teacher, Mr. Lyles (Alex Knight). David tampers with the sound and light system to lure them into the maze, which was the only way in and out of the gym; in doing so, he successfully kills Carver and Mr. Lyles. As Luke and Anna try to get away, Anna reveals the death of their parents to an incredulous Luke and convinces him to hide while she tries to fend David off.

David gets a hold of Anna; she shoots him, but he still manages to wound her in the leg and try to strangle her to death, while she misfires another shot against a mound of hay and accidentally starts a fire. Unexpectedly, Luke appears from behind and stabs David twice, in the back and the chest, much to David’s surprise. As he falls to the floor, seemingly dying, he tells Luke “to never feel bad about it because he did the right thing” and gives him a thumbs-up of approval. The two siblings survive.

Paramedics, firefighters, and police arrive at the scene. While they recover, Luke and Anna hear that “only the bodies of two people were found”. Suddenly, amongst a group of exiting firefighters, one comes out limping: it is David who survived his wounds and is sneaking away, giving the shocked kids a sinister smile as the movie ends. 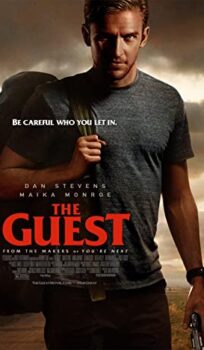