In 1943, during World War II, 2000 British soldiers are trapped on the island of Kheros in the Aegean Sea near Turkey. The Royal Navy cannot rescue them because of massive German cannons on the nearby island of Navarone. Since bombing the cannons by air has failed, a Commando team has been ordered to sail to Navarone and destroy the guns. The 6-man team is led by Major Roy Franklin (Anthony Quayle), and include Keith Mallory (Gregory Peck), Andrea Stavros (Anthony Quinn), Corporal Miller (David Niven), Spyros Pappadimos (James Darren); and “Butcher” Brown (Stanley Baker).

The team sails to Navarone during a thunderstorm, losing much of their equipment. They are forced to scale a cliff upon landing, and Major Franklin is badly injured during the climb. Miller suggests that they leave Franklin behind to be treated by the Germans. Mallory, who takes command of the mission following Franklin’s injury, thinks Franklin would be forced to reveal their plans if left to the Nazis and orders Franklin to be carried on a stretcher. Mallory then lies to Franklin, saying that their mission has been canceled and there will be an invasion of Navarone by the Navy. The team is captured while looking for a doctor for Franklin, but they escape, leaving Franklin behind to receive medical attention. Franklin is injected with truth syrum and gives up the false information, as Mallory had hoped. Because of this, the German Army is deployed away from the guns and in the direction of the supposed invasion site. During this time, the now 5-man team encounters two women who are members of the local resistance. They are Maria, who is Spyros’ sister, and her friend Anna.

Later, Corporal Miller discovers that their explosives have been sabotaged and concludes that Anna is the saboteur. She claims that she was coerced by the Germans to be a double agent, but Maria kills her. The once again 6-person team split up to carry out their missions. Mallory and Miller will blow up the guns, Stavros and Pappadimos will create a distraction in the city, and Maria and Brown will steal a boat for their escape. Mallory and Miller get into the heavily fortified gun emplacements and lock the main entrance behind them. They set explosives on the guns themselves and below the elevator leading to the guns. The Germans break down the doors, but Mallory and Miller escape by diving into the sea, where the stolen boat awaits them. It is then they learn that Spyros and Brown were killed, and Stavros was wounded. When the Germans fire the cannons, the elevator triggers the explosives. The guns and the fortifications are all destroyed, and the Royal Navy can now rescue the British soldiers. At the end, Mallory and Miller return to their base, while Stavros, who has fallen in love with Maria, decides to return to Navarone with her. 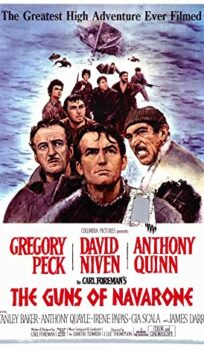