Sook-Hee is a pickpocket who is asked by a thief to pose as a handmaiden, in an effort to convince Lady Hideko, a wealthy woman, to fall in love with him.  He will then marry her and send her to a madhouse so he can receive all of her inheritance.  He has met the woman while creating forgeries for her book-collecting uncle, convincing the man that he is a Japanese count.

The plan goes awry when Sook-Hee falls in love with the lady.  Eventually Sook-Hee reveals the scheme and learns that she was actually hired as a decoy so she could be locked up in the madhouse, allowing Hideko to take on her identity and live freely with her own inheritance after it’s transferred to the Count.  But after falling in love with each other, the women double-cross the Count, sending him to the woman’s perverted uncle to be tortured.  Sook-Hee escapes the madhouse and uses the man’s identity to escape by dressing up as a man and using his ID.  Both women now live as lovers. 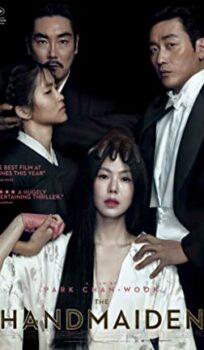