Supposedly based on the life of real-life millionaire Anthony Biddle.  According to IMDB, this is, painfully, the longest movie ever released by Disney.

Pooper:
Cordy and Angie run off to get married.

Longer version:
John Lawless is an Irish immigrant fresh off the boat.  He gets a job as butler at the home of eccentric millionaire Mr Biddle.  Butlers keep quitting due to the strange and irritating behavior of the Biddles.  Biddle is obsessed with boxing and keeps pet alligators.  Daughter Cordy is unhappy, because her boyfriends keep getting knocked out boxing her brothers.  She wants to get away from the family and go to college.  Biddle does not understand why anyone would not want to live in his house.  She finally convinces him.  At college, she meets Angie Duke (male, played by John Davidson).  Angie is heir to the Duke fortune.

Angie and Cordy are engaged to be married.  While the Biddle’s are rich, the Duke’s are far richer.  Mrs. Duke is an obnoxious snob, who makes it clear that she considers the Biddle’s too low class for her son.  Cordy calls off the marriage.  Angie is devastated and is going to run away and join the French foreign legion.  To prevent this, John Lawless (the butler) takes Angie to a bar.  Lawless gets Angie drunk and starts a bar fight. Angie is arrested and spends the night in jail.

Everyone shows up at the jail in the morning.  At Mr Biddle’s prompting, Cordy and Angie run off and elope. 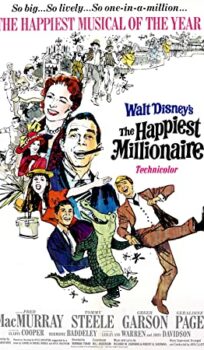