SHORT VERSION:
The killer is puppet Sandra White. She was out for revenge on Phil because her father was Jasper Jakoby, who was accidentally killed 12 years ago by a bullet Phil shot that was intended for a crook holding Connie hostage at the time. She had taken out the whole Happytime Gang both to make Phil suffer as payback and so Jenny (who had faked her death and is Sandra’s wife) could collect on the entire $10 million in royalty money owed to the gang due to their TV show being sold into syndication, after which they would flee the country.

Connie figures out that Sandra is the culprit, and after busting Phil out of jail (where he was being held thanks to Sandra spinning a false story to the cops that resulted in all of the murders getting pinned on him), they find out she is leaving from the Santa Monica Airport and head there to stop her. Phil confronts her in the terminal and discovers that Jenny is still alive when she suddenly appears, but moments later, Sandra double-crosses Jenny by knocking her out, intending to keep all of the money for herself. As she tries to make her escape, she holds Connie hostage, forcing Phil into the same position as before where he has to take a risky shot to save Connie. He takes it, and this time he doesn’t miss, and Sandra is killed.

Phil and Connie get commended by Lt. Banning for solving the case, and Banning tells Phil that he had the captain put a motion in with the mayor’s office to repeal the law banning puppets from becoming cops, which will allow Phil to return to the force. Phil and Connie acknowledge each other as partners again, and Phil also arranges a date with his secretary, Bubbles.

LONG VERSION:
After meeting with Jenny (Elizabeth Banks), his ex-girlfriend and one of the Happytime Gang members, and talking to her about taking stronger measures to protect herself since Larry, Lyle, and Bumblypants have already been done away with, Phil walks her to her car with her promising to call him after she checks into a motel, where she will hide until he finds the killer. However, after she gets in, the car suddenly explodes and apparently kills her. When a cop cruiser shows up seconds later, a panicked Phil flees the scene, and this soon causes everyone to believe that he is the one responsible for all of the murders. He seeks refuge in Connie’s (Melissa McCarthy) apartment since no one will think to look for him there, where he finds her passed out from a sugary food binge. He eventually gets to reminiscing about his past with her while he falls asleep:

12 years ago, Phil and Connie had tracked down a puppet criminal to a construction site, but the criminal got the drop on Connie and held her hostage with a gun pointed at her head, forcing Phil into a standoff with him. Phil ended up firing what he thought was a clean shot at the crook, but the crook was able to just barely dodge the bullet, and it went through a nearby support column and struck and killed Jasper Jakoby, a puppet walking nearby with his young daughter. Connie then tried to wrest the gun from the criminal’s grip and got shot, taking the bullet in her liver, but she was able to shoot and kill the crook moments later. Afterwards, Phil took her to a nearby clinic for puppets to get emergency treatment, and she was given a puppet liver, which saved her life but resulted in her developing her addiction to sugar (which is akin to heroin for puppets). She later testified against Phil when an inquiry was made into the whole incident, claiming that he deliberately missed because the criminal was a fellow puppet, and the public came to believe her wholeheartedly. This was what caused Phil to get kicked off the police force and the law banning all puppets from becoming police officers to get put into place.

The next morning, Connie wakes Phil, and he tells her that he came here because he had nowhere else to go, plus Jenny was taken out last night and the cops think he did it. Just then, they both learn about how another Happytime Gang member, Goofer, was killed during the night. They later drive out to Lancaster to the home of the last two members, Ezra and Cara, thinking that they killed the others in order to collect the entire $10 million in royalty money owed to the gang due to their TV show being sold into syndication, but Phil finds them dead in their bed. Suddenly, the mystery attacker shoves Phil from behind and runs, and when Phil tries to pursue the person, he is met outside by FBI Agent Campbell (Joel McHale) and his men, who had tracked down him and Connie there. After Connie appears soon after, they both get taken to the police station back in Los Angeles.

As Phil is being interrogated by Campbell with Connie and Lt. Banning (Leslie David Baker) present, he gets his attention directed to a neighboring room and discovers that his client Sandra White is in there. After he lets Connie know who she is, Banning informs him that her true surname is Peterson because she was married to Jenny, and she has just told them that Phil had killed her. They then overhear her pinning the blame for all of the deaths of the Happytime Gang on Phil, saying that they had been having an affair for months and that he committed the murders so Sandra would get Jenny’s share of the royalty money and then they could run away together. Phil tries to make clear that he isn’t guilty of any of this, but Banning doesn’t believe him since he was at the scene of every death (or had met with them shortly before their death, as was the case with Larry). As Phil is being escorted to a cell, he tells Connie to do something to prove his innocence. Shortly afterwards, Connie tries to tell Campbell that she truly believes Phil isn’t a murderer, and when he responds by hitting her with a few insults, she attacks him. This earns her a suspension from active duty.

When Connie returns home, she finds Phil’s secretary Bubbles (Maya Rudolph) waiting for her, having picked the lock to get inside. She informs Connie that she searched public records on Sandra White and discovered that no one with that name existed until two years ago, plus she had already tailed her to a dive apartment in Hollywood, confusing Connie since Sandra owns a big home in Pacific Palisades. Bubbles tells her that they are the only people who can save Phil and she can’t do it alone, and Connie accepts that they must investigate this apartment. They head over to the place and break into it, and they find a hidden room that contains detailed plans to bump off the Happytime Gang as well as a conspiracy against Phil. Connie then spots a photo of Jasper Jakoby and his daughter, and she realizes that Sandra is Jasper’s daughter and is out to get revenge on Phil. Bubbles then hits the play button on a nearby tape recorder, but it turns out to be booby-trapped when it starts a fire that burns all of the evidence.

Connie goes back to the police station to speak to Phil in the interrogation room, where she tells him who Sandra actually is and that she had proof of her wrongdoings until she and Bubbles accidentally destroyed it all. She says that the only way they can get him off the hook now is for them to take down Sandra, then she tells him that she is busting him out of here. She first does this by shooting him in the arm and then yelling out into the hall that she shot him in self-defense, and Phil is put into an ambulance with Connie riding with him. On the way to the hospital, she gives him the key to his handcuffs while she chloroforms the EMTs, and they soon call Bubbles, who tells them that she discovered that Sandra booked a private plane bound for Rio de Janeiro that leaves out of the Santa Monica Airport in 30 minutes. They head right on over there, and once they park outside the terminal, Phil handcuffs Connie to the steering wheel and takes her gun, telling her that he ruined her life once already and isn’t doing it again.

Phil goes inside and confronts Sandra, where he tells her how sorry he is for accidentally killing her father and that this mistake has haunted him ever since, but Sandra refuses to forgive him. When he asks why she had to go and kill the whole Happytime Gang, she replies that she simply just wanted to watch him suffer as payback, and that while this all started as revenge, he made her realize that she enjoyed killing, and she can do anything now that she has $10 million. Jenny then suddenly appears, having turned out to have faked her death, and she points a gun at Phil and demands that he drop his. Phil complies, but tells Jenny that she used him like how Sandra has used her, for she seduced her and married her just to get to him. Sandra tells Jenny to shoot him, but she replies that they should just take the cash and split, since Phil can’t really come after them and they are free and clear in the legal sense. After Phil reveals Sandra’s past to Jenny in an apparent attempt to explain exactly how Sandra used her, Sandra double-crosses her by knocking her out with one of the suitcases she has, having opted to take all of the money for herself. Sandra then summons some hired goons to come in and grab Phil, and they take him outside towards a plane intending to throw him into one of the engines and shred him to pieces. Phil prevents this by grabbing hold of the rim of the engine after he gets thrown at it, and then Connie – having just broken out of the vehicle – appears and subdues all of the thugs before saving Phil. After taking two of the thugs’ guns and giving one to Phil, Connie boards the plane she and Phil saw Sandra step into, but Sandra surprises her and holds her hostage by putting a gun of her own to her head, then forces her to go out to face Phil, putting him in the same situation that he was in 12 years ago. Connie tells him to take the shot, so he does, and this time the bullet finds the right target, hitting Sandra in her head and killing her.

Later, as the cops are cleaning up the crime scene, Phil chats with Bubbles and confesses his feelings for her before asking her out on a date, and she happily accepts. After Phil tells Connie about this development, Banning approaches them both and first praises them for solving the case before telling Connie that she is off suspension. He then informs Phil that he talked to the captain and he has put in a motion with the mayor’s office to get the ban on puppet cops repealed, which will allow him to return to the force, and then he presents him with his old police badge. Phil and Connie acknowledge each other as partners again. 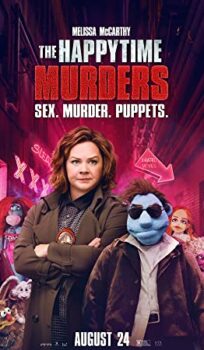