Col. Franz Ritter (George C. Scott) is a German pilot who is promoted to chief of security for the Hindenburg airship. His first mission involves the zeppelin flying from Frankfurt, Germany to Lakehurst, New Jersey, and arriving on May 6, 1937. There are reports that the ship will be attacked, and it’s up to Ritter and German military intelligence to determine whether the reports are true or not. Ritter also questions all of the ships passengers and crew to determine if any of them could be a saboteur.

One of the ship’s riggers, Karl Boerth (William Atherton), has planted a bomb on the Hindenburg. He is part of the German resistance against the Nazis, and he believes the destruction of the Nazi’s biggest piece of propaganda will show the world that there are people inside Germany that are against the Nazis. Ritter figures out that Boerth is the bomber, but since Ritter is becoming increasingly anti-Nazi, he convinces Boerth to set the bomb to go off after the ship lands and everyone is off.

Due to bad weather in Lakehurst, the ship’s landing is delayed several hours. Ritter realizes that this means the bomb will go off before everyone can get off the ship. Ritter goes to Boerth to get him to reset the bomb, but a Gestapo agent (Roy Thinnes) on board has also figured out that Boerth is the bomber and arrests him. When Ritter attempts to reset the bomb’s timer, it goes off. The bomb blast causes the explosion that is seen on newsreel footage around the world.

Of the 96 people on board, 35 of them died (including Ritter and Boerth), and 1 member of the groundscrew was also killed. 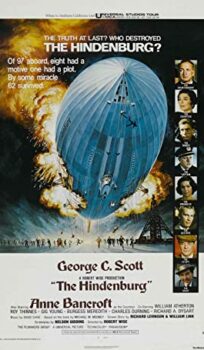