Pooper
The group of dwarfs finally accept Bilbo as one of their own after he saves them from certain doom and Bilbo fully commits to the journey. After escaping from Azog’s clutches, the group rests before it continues its journey to Erebor. Unknown to the rest of the group, Bilbo has acquired a powerful ring from Gollum.

Long Ending
This story is told in flashback, in the form of a story Bilbo is writing for his young nephew Frodo.

The story begins with Bilbo Baggins (Martin Freeman) being approached, out of the blue, by the powerful wizard Gandalf the Grey (Ian McKellan). Later that night, a group of dwarfs arrives at Bilbo’s home, along with Gandalf himself. The dwarfs are led by the bitter deposed king Thorin Oakenshield (Richard Armitage) and seek to re-take their home of Erebor. After Thorin’s grandfather became too greedy in mining the gold of nearby Lonely Mountain, the dwarfs were defeated and forced into exile by the all-powerful dragon named Smaug. The dwarfs, following a prophecy, seek to use a secret entrance to infiltrate the mountain and defeat Smaug, thus retaking their kingdom. Gandalf successfully recruits Bilbo to join the group as their thief, though Thorin believes Bilbo will be a burden as he is not a warrior or adventurer. Thorin has trust issues after the elves refused to help Thorin’s grandfather re-take his kingdom after Smaug’s arrival.

It soon becomes apparent that the group is being hunted by a group of orcs and wargs led by Azog (Manu Bennett). The orcs fought the dwarfs after the fall of Erebor, and Azog killed Thorin’s grandfather (thus, driving Thorin’s dad mad with grief) before Thorin sliced off Azog’s arm. They believed Azog to have died from his wound, but he survived and seeks revenge.

Many adventures ensue as they journey towards Erebor and Lonely Mountain. They also meet another wizard, Radagast the Brown (Sylvester McCoy), who tells Gandalf that a powerful necromancer has appeared, and that giant spiders have descended from the nearby mountains. The group eventually find haven in an elven kingdom ruled by Elrond (Hugo Weaving). Elrond reveals the location of the hidden entrance to Lonely Mountain, although the entrance may only be accessed one night a year. Gandalf is called into a council meeting with Elrond, an elvish witch Galadriel (cameo by Cate Blanchett), and leader of the wizards Saruman the White (cameo by Christopher Lee). Saruman and Elrond oppose the dwarfs mission, and Saruman ignores the story of the necromancer and Gandalf’s concern that Smaug could aid the forces of evil entity Sauron. Saruman decides to stop the dwarfs from continuing, only to discover that they have already left the city and continued onwards.

During a storm, the dwarfs are forced to seek shelter in hostile mountains. After an argument with Thorin, Bilbo decides to leave the group and head back home. Before he can leave, however, a bunch of goblins attack and capture the dwarfs, while Bilbo is pitched off a cliff in the struggle. The leader, the great goblin (voiced by Barry Humphries), intends to sell the dwarfs to Azog. Meanwhile, Bilbo encounters the vicious creature Gollum (Andy Serkis). Bilbo manages to steal a powerful ring belonging to Gollum that turns him invisible when he puts it on. Gollum goes into a rage when he realizes Bilbo stole the ring, but Bilbo uses the ring to escape, also deciding not to kill the pitiful creature when he has a chance. Meanwhile, Gandalf catches up to the group, kills the great goblin, and escapes. Bilbo meets with them outside the mountain, and fully commits to aid the dwarfs in their journey.

Moments later, the group is assaulted and cornered by Azog and his group of orcs and wargs. Thorin faces off against Azog, but is soon defeated. Azog’s general is about to behead Thorin, when Bilbo attacks and kills the general. This act of bravery inspires the other dwarfs to attack Azog’s forces with renewed vigor and the tide of the battle turns in their favor. A group of giant eagles soon arrive to aid Gandalf and company and the eagles fly the group to safety. The group arrives at the home of the eagles, and can see Lonely Mountain in the distance. They decide to stop and recover from their battles, and Thorin finally accepts Bilbo into the group while praising Bilbo’s resourcefulness. Bilbo keeps the ring a secret from everybody.

Meanwhile, we see that Smaug has awakened within the treasure room of Lonely Mountain. 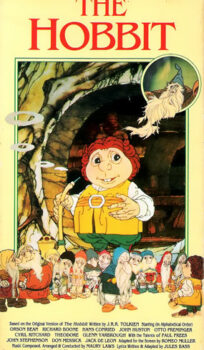