In a Nazi concentration camp during WWII, Victoria and Karin are friends.  Karin (Natasha Lytess) sent her son to live with a wealthy aunt in America before the war, and intended to follow soon after.  Victoria’s family in Poland are all dead and her home destroyed.  Karin dies.  Victoria (Valentina Cortese) takes Karin’s documents and assumes her identity.  Victoria/Karin comes to America, where she learns the rich aunt died, leaving everything to Karin’s son, Christopher.  Her second cousin Alan is his guardian.  Victoria/Karin and Alan (Richard Basehart) marry (each is afraid the other may have a better claim to the aunt’s fortune).

Alan and V/Karin move into the aunt’s lavish mansion on telegraph hill ion San Francisco.  Margaret, a lady hired to raise Christopher since he arrived in America, remains caring for him.  Car brakes fail and other strange things happen, and V/Karin thinks someone is trying to kill her.

Marc (William Lundigan) is the lawyer for the company handling Christopher’s guardianship and the aunt’s estate.  He and V/Karin fall for each other.  Eventually, Marc and V/Karin discover that Alan sent the telegram saying that the aunt had died while the aunt was still alive, indicating he killed her.  Victoria reveals to Marc that she is impersonating the dead Karin.  That night, Alan is insistent that Victoria/Karin drink orange juice that she brought him.  She switches the glasses, so Alan drinks the poison.  Alan is dying from the poison.  Margaret says she will call for help, but never calls.  Margaret is devoted to Christopher, who she has raised from infancy.  Margaret knows Alan killed the aunt, and has now tried to kill V/Karin.  She fears he will try to kill Christopher also.  Alan dies.

Marc arrives and calls the police.  Margaret will be charge with manslaughter, since she lied and never called the police or ambulance.  Marc tells Victoria that he will keep her secret about not really being Karin.  Marc and V/Karin plan to start a new life together, with Christopher, and with the fortune left by Karin’s aunt. 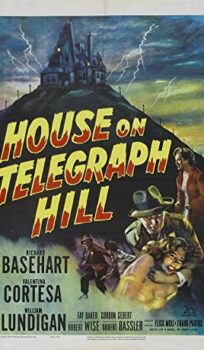