Lewis Barnavelt loses his parents in a car accident, so he goes to live with his uncle Jonathan in Michigan. Lewis then discovers that Jonathan is a warlock, and his neighbor/best friend Florence Zimmerman is a witch. Together, they teach Lewis how to perfect his own magical abilities.

Lewis wants to impress a kid named Tarby so that he can be his friend, so Lewis takes a book from Jonathan’s cabinet (that Jonathan made him promise never to open) and unknowingly resurrects the evil warlock Isaac Izard, who previously lived in Jonathan’s house and left a clock in the house that Jonathan couldn’t find and doesn’t know of its true purpose.

It turns out that Isaac’s equally sinister wife Selena was disguising herself as Lewis’s mother to convince him to do her bidding, which was all part of a plan to bring Isaac back. Isaac explains that the clock is a doomsday device that will turn time back to erase humans from existence after the horrors he witnessed in World War II. Jonathan and Florence help Lewis fight back until they are incapacitated, leaving Lewis to tap into his full potential so that he can stop the clock and destroy Isaac and Selena for good.

Lewis makes a new, better friend at school named Rose Rita, and he now lives with Jonathan and Florence like a real family. 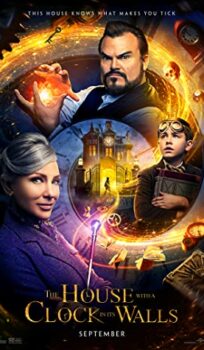