SHORT VERSION:
City councilman Bob and Officer Chandler discover the illegal casino in Frank’s house one night, and Bob confiscates all of the money Scott, Kate, and Frank made before ordering them to close up. They decide to ignore him and keep the place running, but the next night, Alex comes in with her friends and both she and her parents are shocked to see each other there, and then mob boss Tommy Papouli – whom Scott, Kate, and Frank have crossed by accidentally maiming his henchman Carl – enters with his goons and demands for Scott, Kate, and Frank to fork over every cent they have. When they can’t provide it, he decides to take Alex hostage until he gets it. The trio fight back against Tommy and his men and rescue Alex, but Tommy is accidentally killed and Frank’s house is burned down in the process.

The next day, Scott and Kate tell Alex all about why they started the casino and how Bob took their money away, and Alex suggests that they steal it back from him. Officer Chandler then appears and says that he has had enough of Bob and wants to help them. To that end, he keeps Bob away from the town hall while the Johansens go in and steal the suitcase full of their cash from his safe, but thanks to the town treasurer Dawn spotting them, she informs Bob in a phone call that the Johansens are there and he runs back and stops them just as they are about to leave. Bob reclaims the suitcase, but he gets halted by the Johansens in the meeting room, and then Dawn and Officer Chandler walk in. Bob tells Dawn that he took the money from the Johansens for them, prompting her to end her affair with him and return to her husband, and then he pitches a fit and openly admits to Chandler and the Johansens that he has been embezzling from the town’s coffers as well, so Chandler arrests him.

The Johansens take the suitcase home and Alex goes to college in the fall, her tuition covered.

LONG VERSION:
One night, city councilman Bob (Nick Kroll) and Officer Chandler (Rob Huebel) discover the illegal casino Scott (Will Ferrell), Kate (Amy Poehler), and Frank (Jason Mantzoukas) have been running in Frank’s house, and after finding their hidden safes full of money, Bob tells them that they are confiscating every dollar for Fox Meadow (the town the movie is set in) and the casino must be shut down immediately. He and Chandler pack all of the cash into a suitcase and then depart. However, the next day, Scott and Kate agree to a plan where they will keep the casino operational, but put no limits on any bets so they can quickly make back the money they lost and get Alex’s (Ryan Simpkins) tuition covered, and then they will close the place down for good.

That night, Frank’s estranged wife Raina (Michaela Watkins) comes into the casino, and believing that Frank hasn’t ended his gambling addiction, she tells him that their marriage is definitively over. Alex also appears with her friends, and she and her parents are both shocked to see each other there, so her parents take her into the room where the hidden safes are so they can spill the beans on everything to her. Just then, mob boss Tommy Papouli (Jeremy Renner) barges in with his men, one of whom is Carl (Steve Zissis), the man whose middle finger Scott accidentally chopped off with an axe a while back when he caught him counting cards (and caused Scott to earn the nickname “The Butcher”). Tommy confronts Frank with gun drawn and forces him into the room Scott, Kate, and Alex are still in, and he demands for them to hand over all of the money they have. Frank tries to tell him that they are flat broke and points out the empty safes, but Tommy doesn’t believe him, and then grabs Alex and cuffs himself to her. After telling his underlings to help the trio find the money, he orders the trio to come up with $300,000 or they will never see Alex again.

He and Carl then exit the room with Alex while the rest of the goons keep their guns pointed at the trio, but Scott, Kate, and Frank are able to hit them with a surprise attack and knock them all out. Frank then heads out first to save Alex, but Tommy stabs him with a knife, after which Raina tends to him. When Tommy resumes his departure, he finds himself face-to-face with an axe-wielding Scott. Scott gives a verbal cue to Alex to strike Tommy in the genitals, and then he brings the axe down intending to cut the chain on the cuffs. However, his aim is off once again, resulting in him cutting off Tommy’s arm at the elbow. Then, in an attempt to scare Tommy away, Kate sends a fiery blast from her blowtorch (which she carries since her nickname is “The Burner”) at him with the aid of an oxygen tank, but Tommy’s good arm catches fire from it, and the fire ends up engulfing the majority of his body when Scott and a couple of patrons try to put it out with things that turn out to be flammable. Frank rolls up Tommy in a rug and apparently smothers the fire, but that gets set ablaze, too, and Tommy is killed and the whole house winds up burning down. Outside, Frank talks to Raina, and after finally owning up to all of his faults, he tells her that he will sign the divorce papers. However, Raina decides to call off the divorce, then suggests that they commit insurance fraud by claiming that some of the stuff she had already taken out of the house had gotten destroyed in the blaze.

The next morning, Scott, Kate, and Alex are seen sitting in the backyard of their house, and Scott and Kate finally explain the reason for the casino’s existence to Alex. While Alex acknowledges that doing that was not the smartest idea, she understands that they were doing it all for her and is not upset with them. Scott bemoans how their money is gone and Alex can’t go to Bucknell University now, and when he and Kate bring up how Bob took their money, Alex suggests that they go and steal it back from him since he was the one who took her Fox Meadow Scholarship away. However, neither Scott or Kate are eager to commit another crime. Chandler then shows up and first states that he isn’t going to arrest Scott or Kate because what they did to Tommy and his men constitutes self defense, then tells them that he has decided to turn against Bob because Bob doesn’t care about the town one bit (which is true; Bob has been embezzling from the town’s treasury for quite some time), and then says that he has a plan for them to get their money back. That night, Chandler meets with Bob in his office at the town hall and tells him that Scott, Kate, and Frank ignored his order to close down the casino and are running it out of someone else’s house now, and then he shows him a video he recorded on his phone where the patrons are making fun of Bob. Bob then heads out with Chandler in a patrol car to arrest the trio, unaware that Chandler is keeping him away from the building in order to give the Johansens the opportunity to sneak in, access the safe in Bob’s office (with Chandler having provided the combination), and remove the suitcase full of cash from it.

The Johansens succeed in getting the money out, but while trying to make their getaway, they overhear the town treasurer Dawn (Allison Tolman) (who has been cheating on her husband Joe [Rory Scovel] with Bob) talking to Bob on the phone and telling him that she saw them all come into the building. After she goes into the office and sees that the Johansens left the safe open, she alerts Bob to this, and when he tries to make Chandler speed back to the town hall, they wind up getting themselves into an accident. Bob runs to the building on foot and catches the Johansens as they reach an exit, then chases them back inside. Bob soon ambushes Scott and makes off with the suitcase, but Scott catches up to him inside the meeting room and leaps onto him, sending them both crashing down onto a model of a town pool that Bob wanted to see constructed. Scott discovers that Bob handcuffed himself to the suitcase, and when Bob taunts him with the question of what he intends to do about it, Scott notices and grabs a fire axe off the wall. He brings the axe down to sever the chain on the cuffs just after Kate and Alex walk in, and this time, he hits his mark.

Chandler then appears with Dawn, but when Bob tells Chandler to arrest the Johansens, he flatly refuses and orders Bob to not touch the money. Dawn then asks Bob if he stole that cash from them, and the Johansens say that he did. Bob then tells her that he took the money for them and their future, and says that he wants her to be his First Lady when he runs for U.S. President. Dawn replies that he will never become president because he is too short, and then Joe suddenly appears behind her. Dawn tells Bob that she is already a “First Lady” to Joe, then leaves with him, breaking off their affair. Bob then pitches a fit and screams that he did take the money from the Johansens and from the town as well, claiming that he deserves it all because of how he believes he gave the town so much. Scott tells him that he is glad he said that because the security cameras in the room picked up every word of it, prompting Bob to run away, and Chandler goes after him to apprehend him (and it’s safe to say that he does). After he goes, Scott tells Kate and Alex that he lied about the cameras; he just said that to freak Bob out. He and his family then take the suitcase and go home.

In September, Scott and Kate drop Alex off at Bucknell, and she gives them her love and her thanks for getting her into college. Scott and Kate return to their car, but when a driver of an idling car next to theirs won’t pull up so they can get out, they go up to his window and threaten him with their signature axe and blowtorch, scaring him into compliance. They then maniacally drive away from the campus. 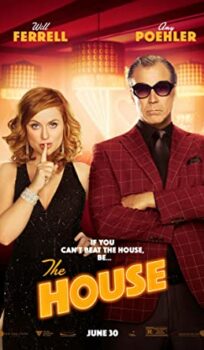